Exactly 11 years ago at this moment I was walking down the aisle standing in the front of a judge in Enterprise, Alabama, getting ready to say “I do”. There is one picture of our wedding day in the anniversary post I wrote two years ago, but can you believe that last year, on my 10th wedding anniversary my blog post was titled “I Think I’ll Live”? And there was no hint of irony there… My biggest celebration of that day was that I was able to speak & walk five steps & brush my teeth myself, and had hope that I will see my 11th wedding anniversary. We didn’t really care that we didn’t have a big wedding (I still don’t have any regrets). My family & friends were in Finland, Matt’s in Texas, and having a wedding in either of those places would have left one of us feeling out of place and not knowing anyone. We were getting married to spend the rest of our lives together, I didn’t care for anything else. While I understand the feeling of wanting to shout it down from the rooftops when you are so ultimately in love with someone, but love had hit me so suddenly and getting married felt really intimate and independent decision to me. Of course there were the factors that my parents hadn’t even met Matt, my friends thought I was crazy, and many of them thought I was “wasting my life” by moving to the other side of the world. While my friends back in Europe thought my decision of getting married to an American soldier was the craziest thing I had ever done, to me it was the decision that felt the most right than any other decision I had ever done in my life. I still think that way. We got married on a lunch break. The court house was not open during the weekends, and Matt was in the military flight school, unable to even get a whole day off. My mom had made me a dress, but my parents weren’t even there for the 5 minute ceremony, Matt’s family had driven in from Texas the day before. Our witnesses were Matt’s classmates, dressed in army uniforms and green flight suits. My mother-in-law-to-be bought me flowers, which I hadn’t even thought of getting, and we forgot to even get a wedding cake, but got one the night before from grocery story (and of all places I think it was Walmart, if I can remember correctly!). Only things I had really thought of getting to celebrate the day were new lingerie and a bottle of champagne! So since I don’t have a picture story of our wedding, I figured I will share some other pictures from the past. This is the first 6 years of our marriage…. 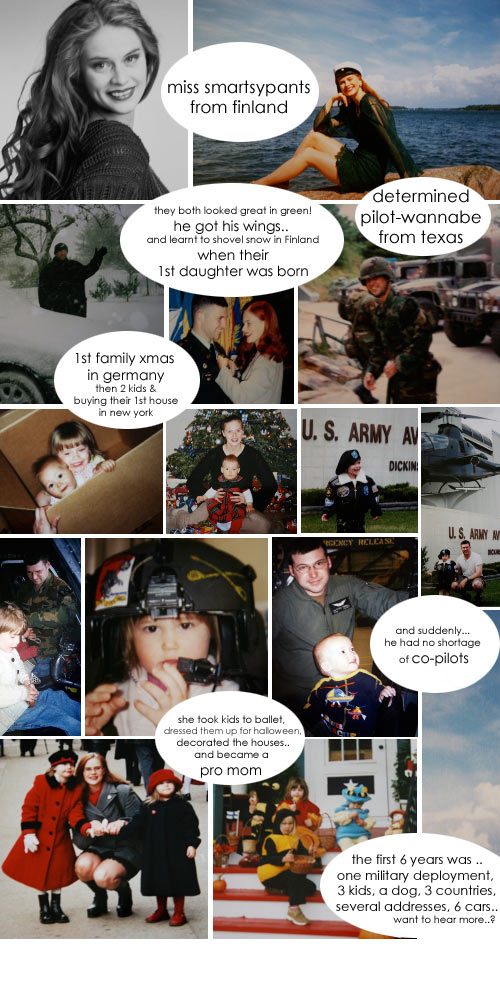 Of course, since we have lived the skimbaco lifestyle before I even made up the word, this photo collage isn’t even close to describe our life.. like how we moved to Germany after being married for a year, but I went to Finland to have our first baby, while Matt was deployed in Kosovo. Or how we had another baby in Germany, moved to the US when she was two months old, lived in Alabama again, took girls to DisneyWorld. Magically I was pregnant again.. and we bought our first house in New York, lived a while at Virginia Beach, sold the house in New York, Matt got out of army, flew TV news helicopter in Cleveland, Ohio… and we built our dream house in Nashville, Tennessee, but moved to be ski bums, pro moms and rescue helicopter pilots at the Rocky Mountains. Last year travelled 2 months, now we live outside New York City… And I feel that this is just the beginning. Only thing that has changed since the day we got married is that I don’t care for the lingerie anymore. Today I just want champagne. Oh, and one more thing. I really love you Matt. cinderella story, live life to the fullest, live life to the fullest, love, marriage