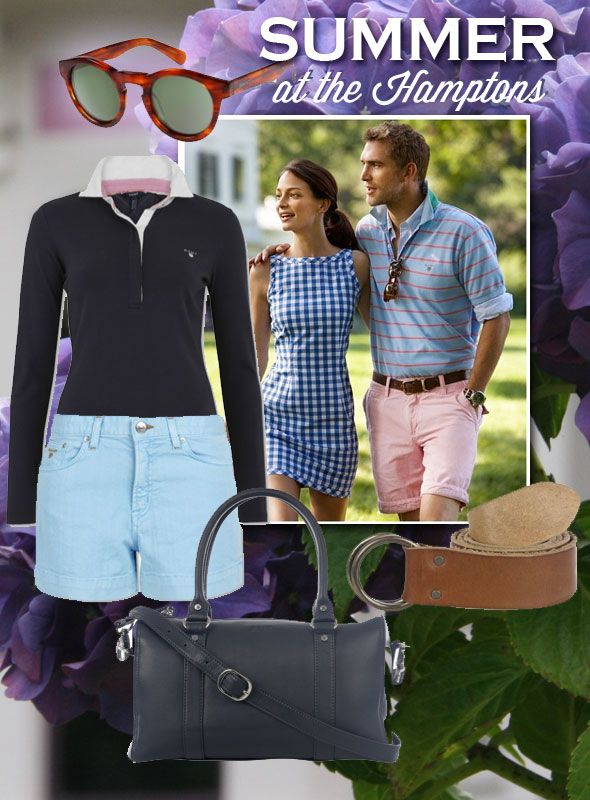 Get ready to spend summer at the East Coast, but even if you are not heading to the Hamptons or Rockport this summer, GANT gets you feeling you are. GANT’s summer 2012 collection gives you the easy-going, preppy but cool look even if sailing isn’t in your summer agenda. I’ve always loved GANT, even before I moved to the USA over ten years ago. GANT’s history dates back to the company’s inception in New Haven, CT in 1949, and they started as the leading US shirtmaker, and their shirts are now known and loved world wide. They have always brought European flair combined with American heritage. GANT is responsible for introducing button-down collared shirts in the US, and is credited with inventing the locker loop, and famously spread in popularity across the country through Ivy League campuses. More recently the company has revived its archival GANT Rugger label, and has launched a successful designer collaboration with Michael Bastian. GANT is considered to be one of the first great American sportswear brands, and is the epitome of contemporary American style.

GANT will be opening three new stores in the US! New stores in Los Angeles, Boston and Georgetown are slated to open over the next four months. Opening in July, the Los Angeles GANT Rugger store will be the brand’s first outpost on the West Coast. Located at 1308 Abbot Kinney Blvd in Los Angeles’ iconic beachfront Venice neighborhood, the 1,700- square-foot store will sell both the GANT Rugger and the men’s and women’s GANT by Michael Bastian collections. Departing from existing GANT Rugger stores in New York City, the GANT Rugger L.A. location will include light modernist touches while still maintaining a vintage feel. Décor will be clean and crisp mixed with a mid-century 1950’s style. By August, GANT will open its first New England store on Boston’s premier Newbury Street. Chosen for its unique mixture of college students, tourists, young professionals and old East Coast heritage, the city of Boston is a perfect fit. Located at 324 Newbury, the 2,000 square-foot GANT store will reside inside a street-level brick building and will retain its original historic elements with selected updates including white wainscoated walls, subway tiles and both vintage and artisan fixtures and furniture.

Finally in September, GANT will unveil a company store in Georgetown at 3239 M Street. The 2,000 square-foot GANT store and will also carry a curated selection across all brands. A prime retail location in a historic neighborhood with abundant lighting and large scale skylights, the space was once a historic live jazz bar called Saloun and will feature design elements similar to the Boston location. Georgetown’s M Street and Boston’s Newbury Street locations will incorporate new GANT store design elements that may appear in future global retail concepts for the company. The new store design will prominantly feature a centerpiece fixture that will showcase a hand picked assortment of shirt styles for both display purposes and folded stock. Additionally, both locations will offer a curated selected from all collections including GANT, GANT Rugger and GANT by Michael Bastian’s men’s and women’s collections. The three stores join GANT’s existing retail locations including two GANT Rugger neighborhood shops and a 5th Avenue flagship in New York City as well as a GANT Campus Store at Yale University in New Haven, Connecticut, where GANT was founded in 1949.

I’m linking up to Fashion Friday posts at Blonde Episodes and All Things Chic, check out their sites for more fun Friday fashion.