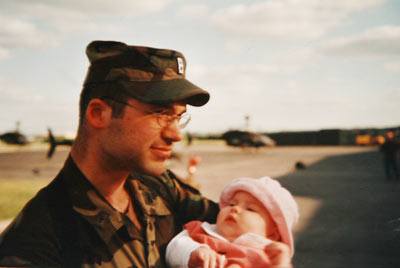 My husband Matt is not active duty anymore, but was an army helicopter test pilot for the first 6 years of our marriage. We were stationed in Germany when Matt got deployed to Kosovo. It was 2000, and during that time our first daughter was born. I came back to Germany to our home about one month before Matt was coming home from Kosovo. Isabella was three months old when we moved from Finland to Germany, and I was so excited to be back. It was springtime, and the weather was nicer in Central Europe than what it had been in Finland, my baby was healthy, happy and growing well, and I was ready to go back home. And more importantly, I was ready to see my husband again, and start our life together as a family. It had been lots of nightless nights with a newborn and worrying about Matt being in Kosovo, but once we got back to Germany I felt much closer to Matt. I remember the weeks before the Homecoming Day being full of happiness, and excitement. I counted days and hours for Matt’s arrival, and I wanted everything at home to be perfect. I sewed Isabella a dress that said “I (heart) Dad” in the front for the Homecoming Day. I embroidered the little heart in it. I think Matt probably thought it was the dorkiest little dress ever, but I didn’t care. I needed to keep my days busy, so I also knitted little sweaters and made scrapbooks and the house was so clean that you could eat from the floors. I was like an Energizer Bunny charged with Homecoming Happiness. I was nesting probably more than I had before the baby was born. Then it was the Homecoming Day. Matt’s unit was flying their helicopters in in a formation, and their arrival was set for noon. I changed my clothes probably like five times that morning. Even though I had planned my outfit already a week ago. And you know what happens when you are trying to leave a house with a four month old – yeah, it happened, right when we were leaving, and I had to stay for another diaper change. And I totally missed seeing Matt to land his helicopter. On a Homecoming Day. After he had been in Kosovo for six months. We arrived to the air field after the rotors had stopped spinning, and after every one else had said their teary eyed hellos. I’m sure Matt was disappointed, but he didn’t say anything. Heck, he was two hours late on our first date, so a few minutes on Homecoming Day was nothing. It actually felt like a first date, in a very weird way (in a good weird way). No tears, just the strongest squeeze-hugs ever. I couldn’t believe he was home, and he was all mine. And now we were a family. He couldn’t believe how much babies grow in just a matter of few months. I had sent him photos of Isabella, but he said he wouldn’t have even recognized her. A baby who had been under weight at birth was now this butterball with rolling sausage hands. I think it was all very overwhelming to him. I don’t even remember if there was any kind of formal program, if anyone said welcome home. We had some banners made and hung up on the fences all over the post, and I think mine said “Minä rakastan sinua”, I love you in Finnish. I knew he would know what it meant, but others wouldn’t. I think all of this Homecoming stuff was kind of bothering him, and he just wanted to go home. So did I. We snapped one last photo to remember the day, and it was with three of Matt’s best buddies and their wives. They were the “Four Horsemen”, who battled through the flight school together, graduated and all were sent to Germany for their first assignment as pilots, and then to Kosovo. Their wives had become my best friends during our first year in Germany. The Four Horsemen were back in town, and life was good. 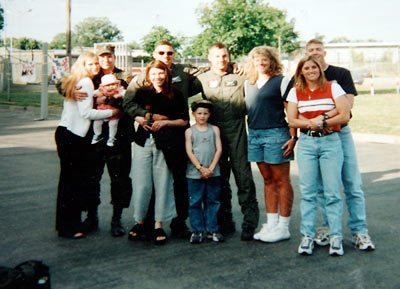