Austin, Texas, more than the home town of Willie Nelson and Matthew McConaughey

Austin, the city of Willie Nelson and Matthew McConaughey

Willie Nelson celebrates his 81st birthday today. Willie Nelson was the first performer (in 1974) on what is now the longest-running music program on TV in the US, the Austin City Limits, airing its 40th season starting in this fall. Actor Matthew McConaughey on the other end won his first Oscar earlier this year, and is still most known for being shirtless and speaking in Texan drawl. Both call Austin, Texas, the home. 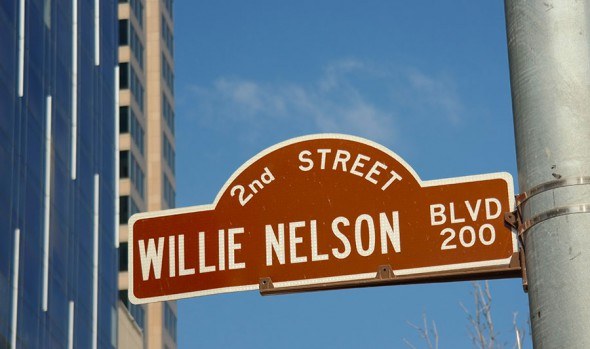 I have been married to an Austinite for almost 16 years, and visited Austin regularly for as long. Well, “Austinite” is sort of far-fetched, my husband hasn’t lived there close to 19 years. In fact, my work has taken me back to Austin more often than my husband has been back home the past several years. I have been trying to crack this whole “keep Austin weird” thing. The entire Texas is weird to me, but Austin is by far the most down-to-earth of it all. The “Keep Austin Weird” slogan started as an effort to promote local small businesses, which ended up keeping Austin the most hipster city in the whole wide Texas. Austin gave us the Dell-computers, it’s also the birthplace of Whole Foods, and the retirement city of Willie Nelson. Mix tech-savvy people, European style local food appreciation mixed with Tex-Mex, yoga-lovers who kayak in the lake, and add buzzing live music scene that birthed Austin City Limits and SXSW Music Festival and you get a pretty good idea of Austin. Above all, it’s a great city to visit. And as I keep hearing, to live in too. 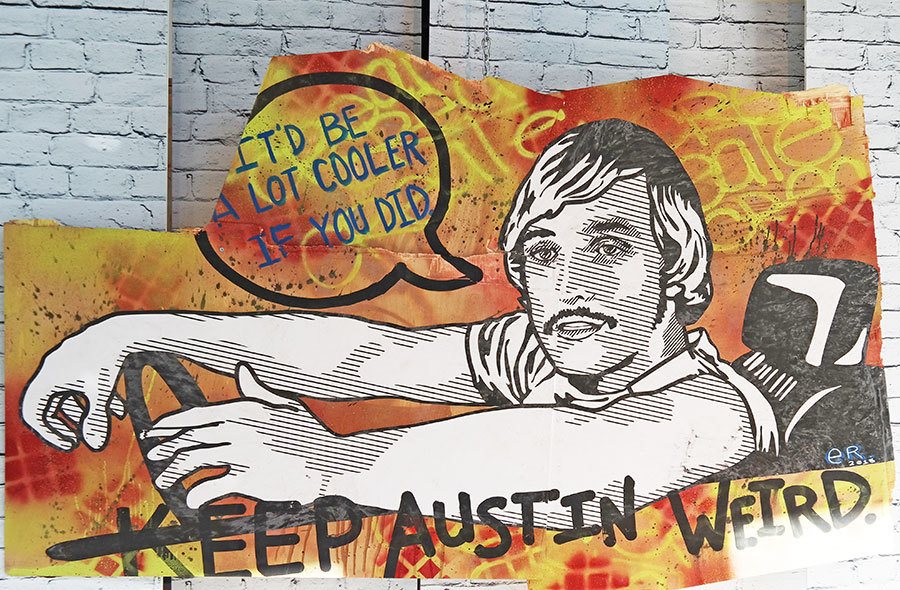 The city has expanded ridiculously and perhaps will be taken over by young professionals, and free-thinkers from around the country. It really already is a new melting pot of a some kind. In many ways Austin is one of the more forward-thinking cities in the US when it comes to urban planning, and public transportation. That and the support for local small business has attracted a certain kind of crowd. Ironically it has also attracted larger businesses, but Austin has still been able to keep the neighborhood-feel in many ways despite the massive growth. What really seems to unite the Austinites is the freedom of being who you are and loving Austin for what it is. As an outsider I feel like Austin has become much more Europeanized the past ten years as well. I still remember meeting my husband’s friends for the first time 16 years ago and being laughed at my European clothes, “Diesel, what kind of jeans are they,” the girls were laughing. (Um, Italian.) Now the entire city has adopted European standards, like not giving out free plastic bags at stores, but charging for them in order to reduce waste. The local thinking has gotten a lot more global view, in my opinion. 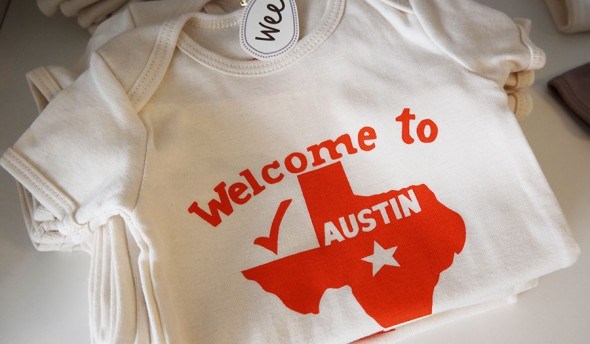 I visited in Austin in March the last time and when I visit Austin, it’s always about family, food and shopping. This visit was even more special than usually – I got to meet my month-old niece for the first time. I also attended the SXSW conference, always an experience. Unfortunately I have only attended the interactive part of the festival, and haven’t seen the entire music part of SXSW at all.

My favorite day was when we spent a day on the 2nd Street with my sister- and mother-in-law. It was one of the first outings for the baby Annie, and I have to say, 2nd Street tested pretty well for strolling around with the stroller. I would recommend it also for families, there were several children’s stores and plenty of coffee shops and restaurants where you can also sit down with the kids, even though it’s in the downtown business district, and the restaurants fill in during the lunch time. It’s not the “5th Avenue of Austin,” the luxury shopping happens in premium malls (and in the outlet mall in Round Rock). The 2nd Street is an Austin (shopping) experience you shouldn’t miss. With eclectic clothing boutiques and home stores like Design Within Reach, you will get to see the mix of Southern comfort and modern vibe Austin is all about. 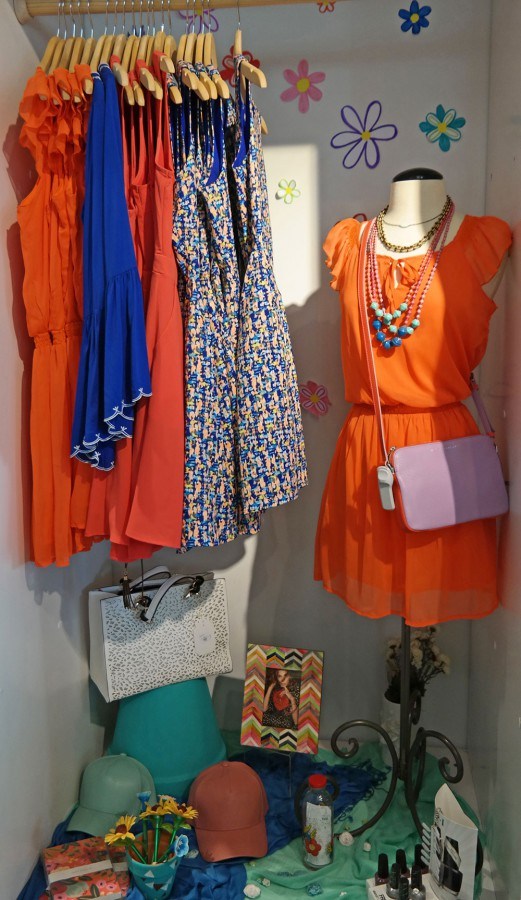 I was walking down the 2nd Avenue and saw a store window and asked my sister-in-law “is this a thrift shop, looks really cool,” and made a fool of myself. The store was one of the higher end boutiques of the 2nd Street selling Marc Jacobs among other designer clothing and accessories. To my defense, the thrift shops in Europe have well-decorated eclectic windows luring hipsters in, and this fashion store’s windows looked like our hometown thrift store windows. 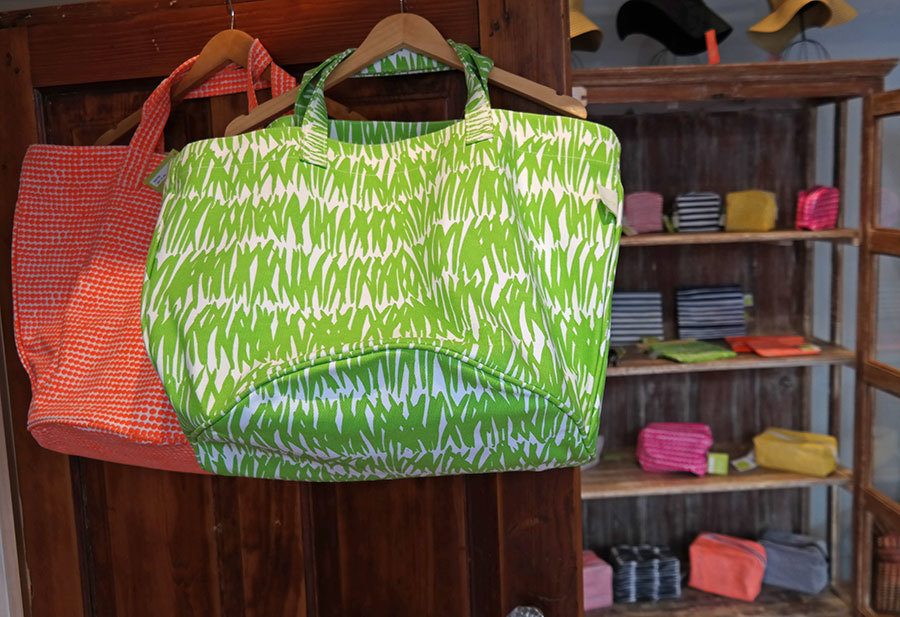 But it’s Austin. It’s completely OK to have your Marc Jacobs mixed with some country style – or yoga pants. I asked a few locals what’s trendy in Austin at the moment, but everyone seems to be too cool to answer. “Everything goes, just be yourself,” said the hairdresser as I got my hair done in a local salon. 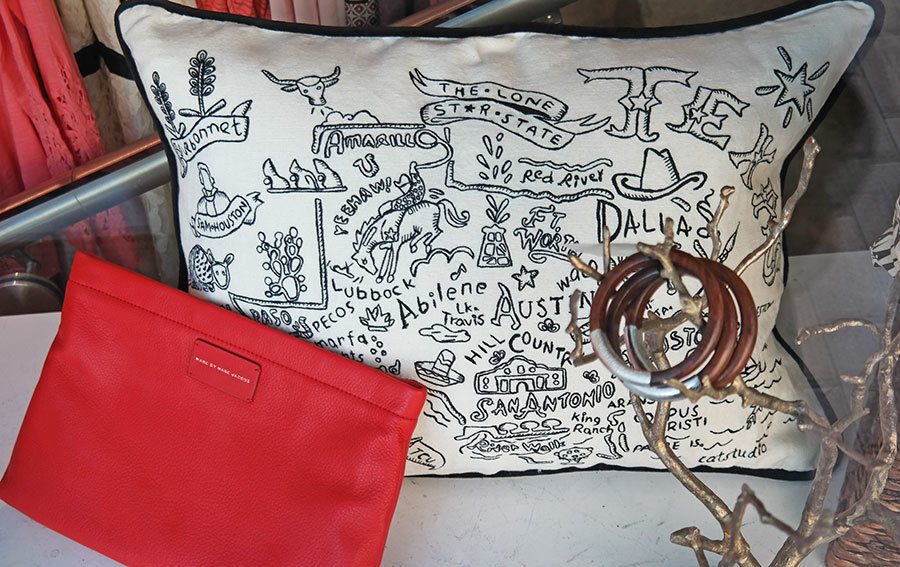 The 2nd Street is popular among visitors, but it’s not like you see the same tourist merchandise you see in every tourist attraction (just with a different name printed on). In Texas you see a galore of handmade products created by local artisans. Sure, you see the cheaper knock-off produced in China in Texas too, but the amount of products from local artisans is pretty impressive in Austin. 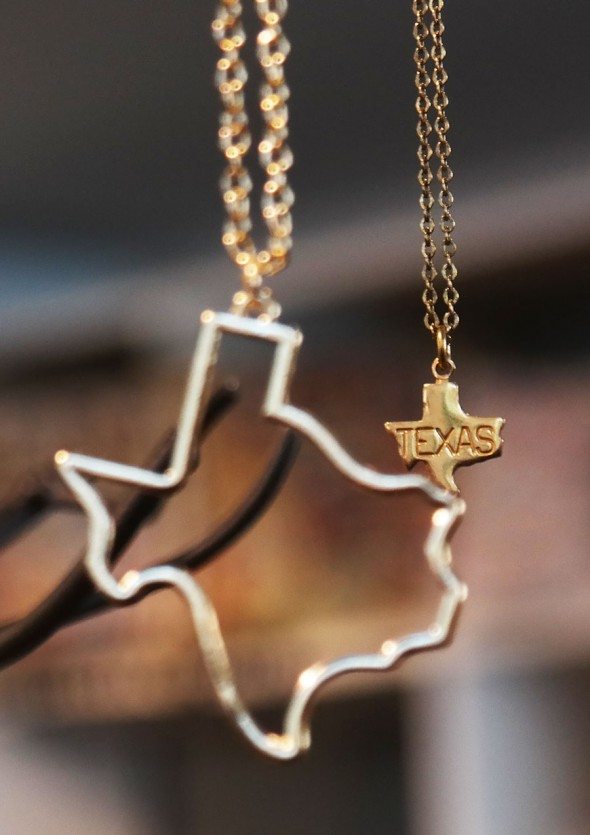 And the Texas-state shaped and the Texas-flag carrying products are probably more popular among the locals themselves than the tourists! (You also have to remember that big chunk of Austin’s population is transplants, so they still feel like tourists in their hometown, just don’t tell them I said that). 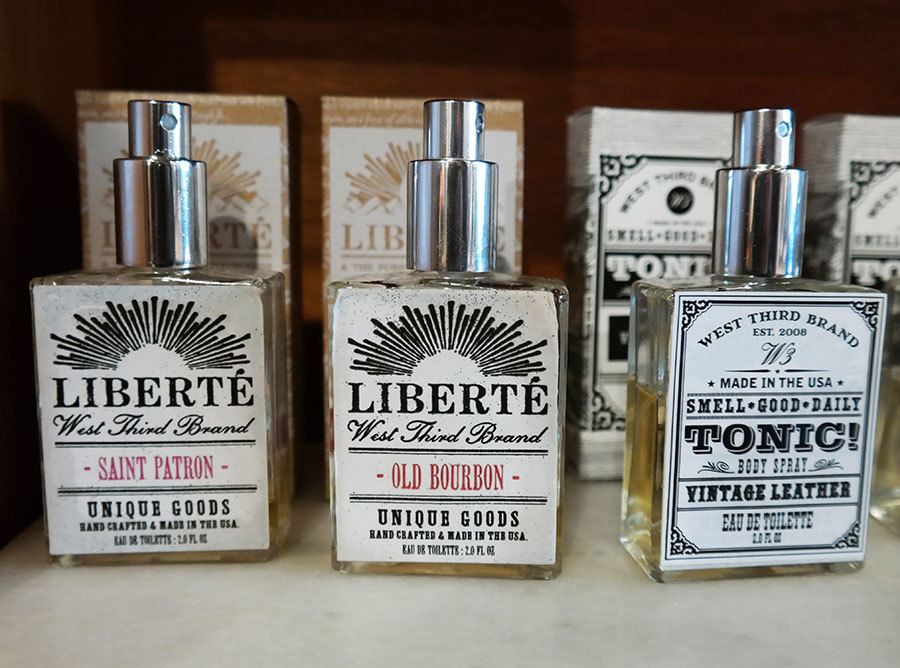 You could find many European brands from the 2nd Street boutiques, but I was glad to find still several unknown-to-me products and brands from the stores. The cowboy-look you can see anywhere else in Texas isn’t as prominent in Austin, but the Native American tribal look is (still) very trendy.

When the kids were younger we took them to the Austin Children’s Museum on the 2nd Street, but it has moved to a new location out of 2nd Street, and is now called the Thinkery. Other big changes I saw were also the big brand design stores and stores like the Urban Outfitters coming to the 2nd Street. Good that the district has now established itself as a destination, but I hope it won’t force all of the small businesses out on the end. 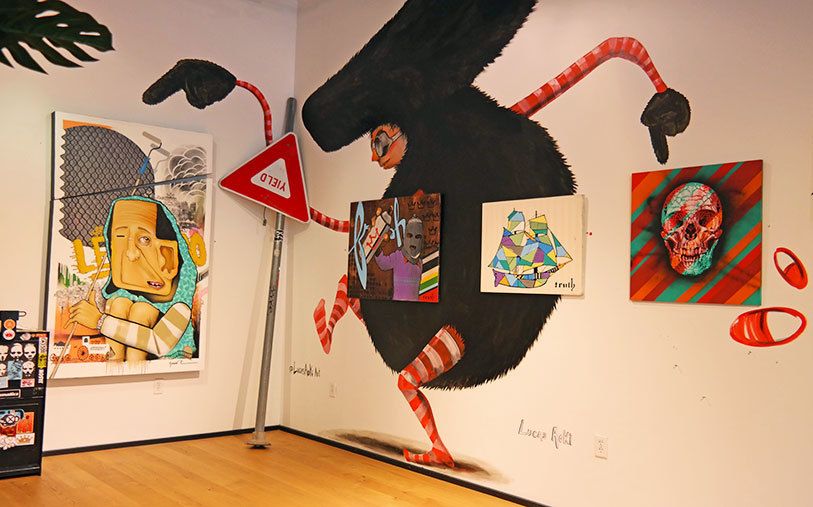 On a very interesting note, there was a new art gallery, which placed where BoConcept, Danish designer home store used to be. I don’t know if it’s a permanent home for art on the 2nd Street, but we visited the art gallery project ArtProm by Big Ass Canvas when it had just opened a day before. 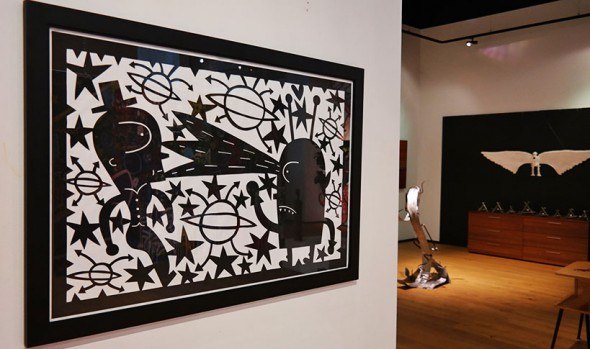 Well played Austin, you are still keeping it “weird.” 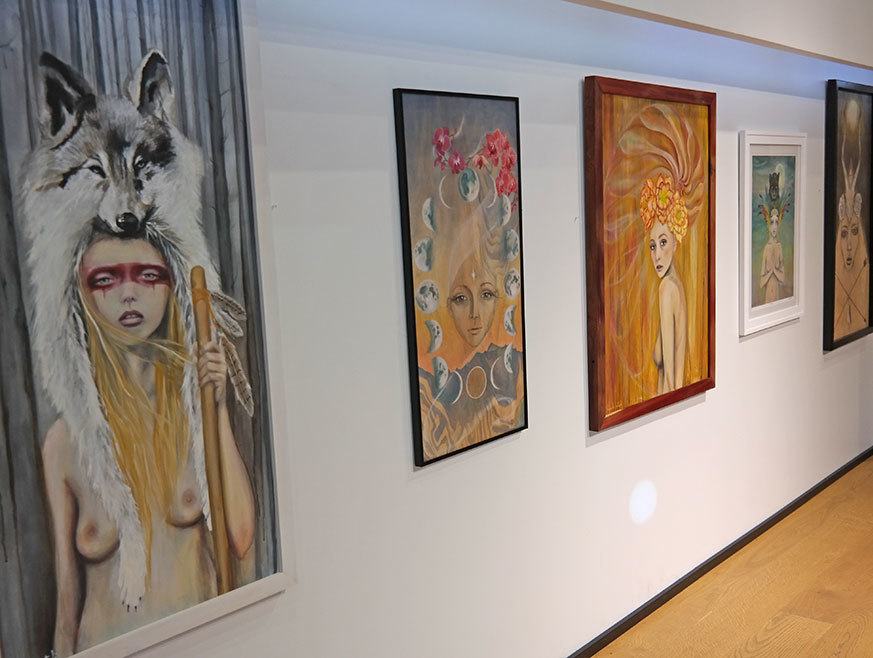 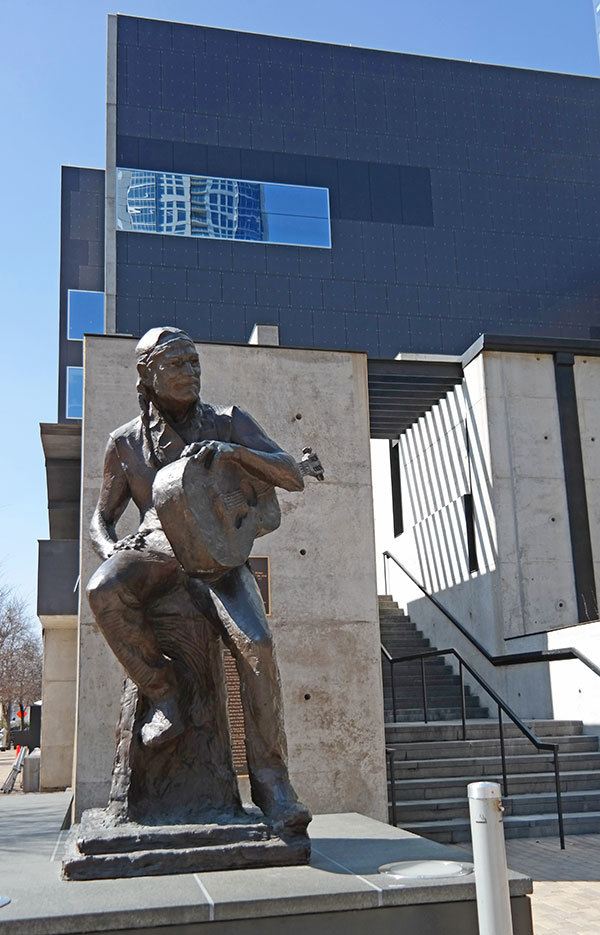 There is already a street named after Willie Nelson in Austin, and a 8-foot bronze statue of him decorates the 2nd Street. “There would be no Austin City Limits without Willie Nelson,” said Matthew McConaughey in the weekend’s induction event. Many could say that Matthew himself has done quite a bit promotion for the city of Austin.   Austin, austin city limits, matthew mcconaughey, SHOP, Texas, TRAVEL, USA, willie nelson