The Moomin Flagship Store in Helsinki Celebrates its First Anniversary

Year of Celebrations for Moomin

This year the Moomin’s celebrate its 75th anniversary with the #OURSEA-campaign, and now the Moomin’s flagship store celebrates its first year. 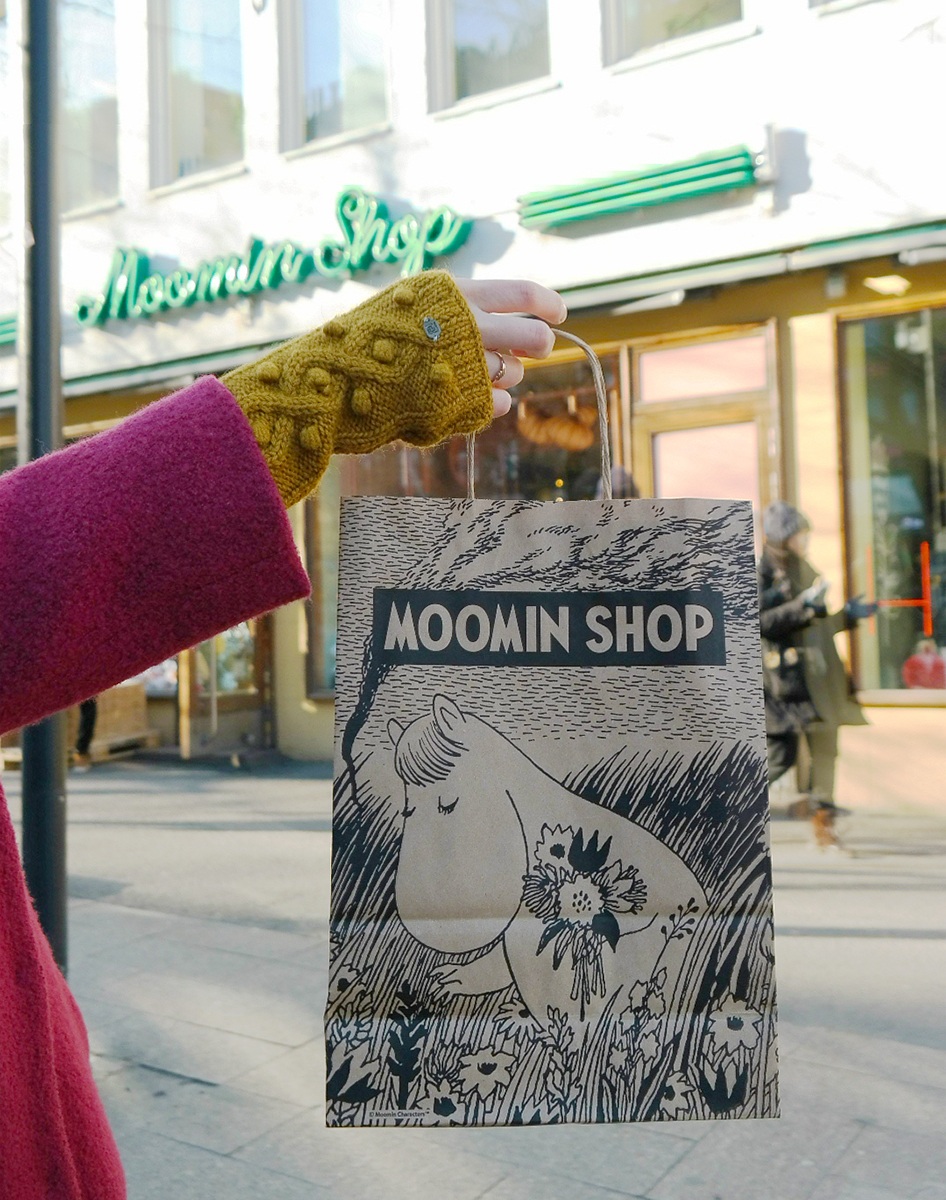 The flagship store is located in the center of Helsinki at Lasipalatsi, one of Helsinki’s most notable functionalist buildings, located in the Kamppi district. The Lasipalatsi building was designed in the 1930s by at the time architecture students Viljo Revell, Niilo Kokko, and Heimo Riihimäki, as a temporary building. As time passed it became an attraction of the time representing functionalistic architecture as its best. In the 90s it was renovated to restore its 1930s charm and in 2016 renovated again as the building of the underground museum was underway. Lasipalatsi re-opened in 2018 with the new Amox Rex, cinema Bio Rex, with cafes and shops. 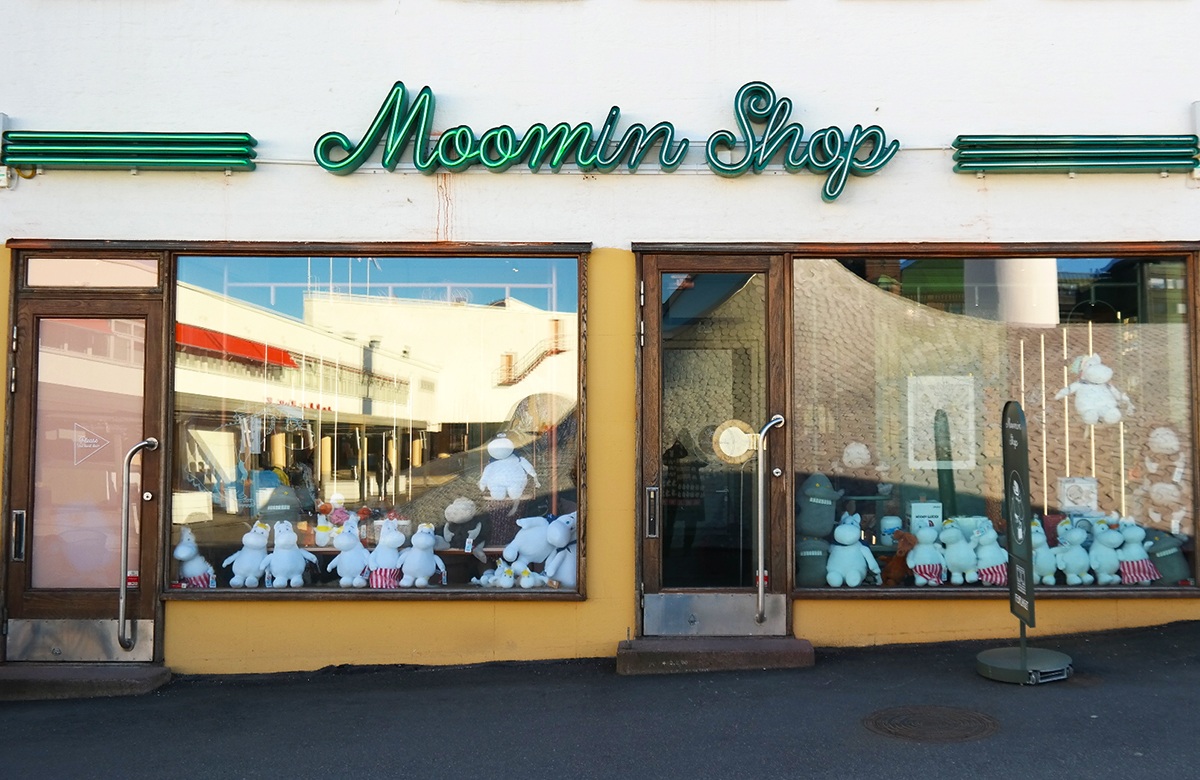 The shop opened in the autumn of 2019 taking on the role of the Moomin’s flagship shop. The interior is based on Tove Jansson’s The Moomins and the Great Flood, published in 1945. It is the first book Tove wrote that features the Moomins, though it’s often seen as a prelude to the stories. It tells of Moominmamma and Moomintroll’s search for Moominpappa and their travels which lead them to Moominvalley. It’s a story of a divided family trying to find each other and a new home. Based on the book’s design, the store is filled with pastel colors of pink and green. It’s a warm and peaceful space with large windows and wicker elements. Around the store, you can find original artwork from the book, celebrating Tove Jansson’s art. It’s not just a store, it’s a space to feel the magic of the Moomins. 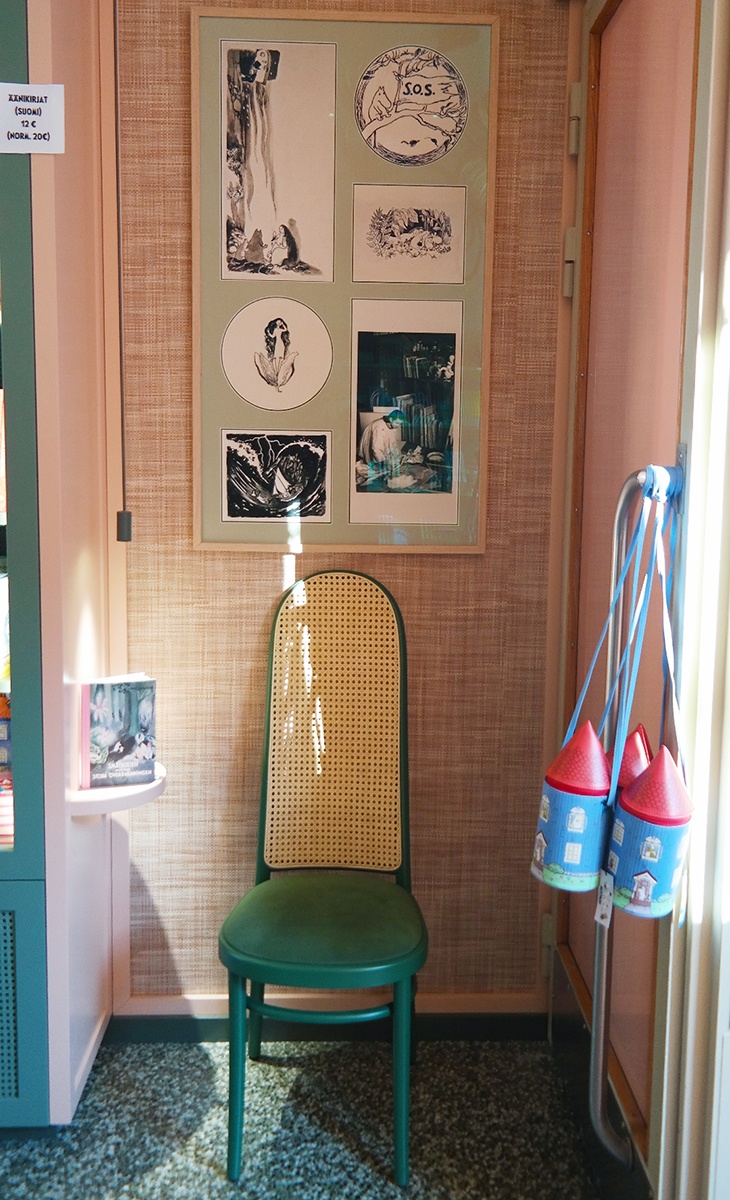 Inside you can find all things Moomin, from books to the classic Arabia mugs, toys, clothes, and more. There’s something for everyone, there is no age limit to the Moomins. For the remainder of the month, the Moomin Shop Lasipalatsi is offering discounts on many products. 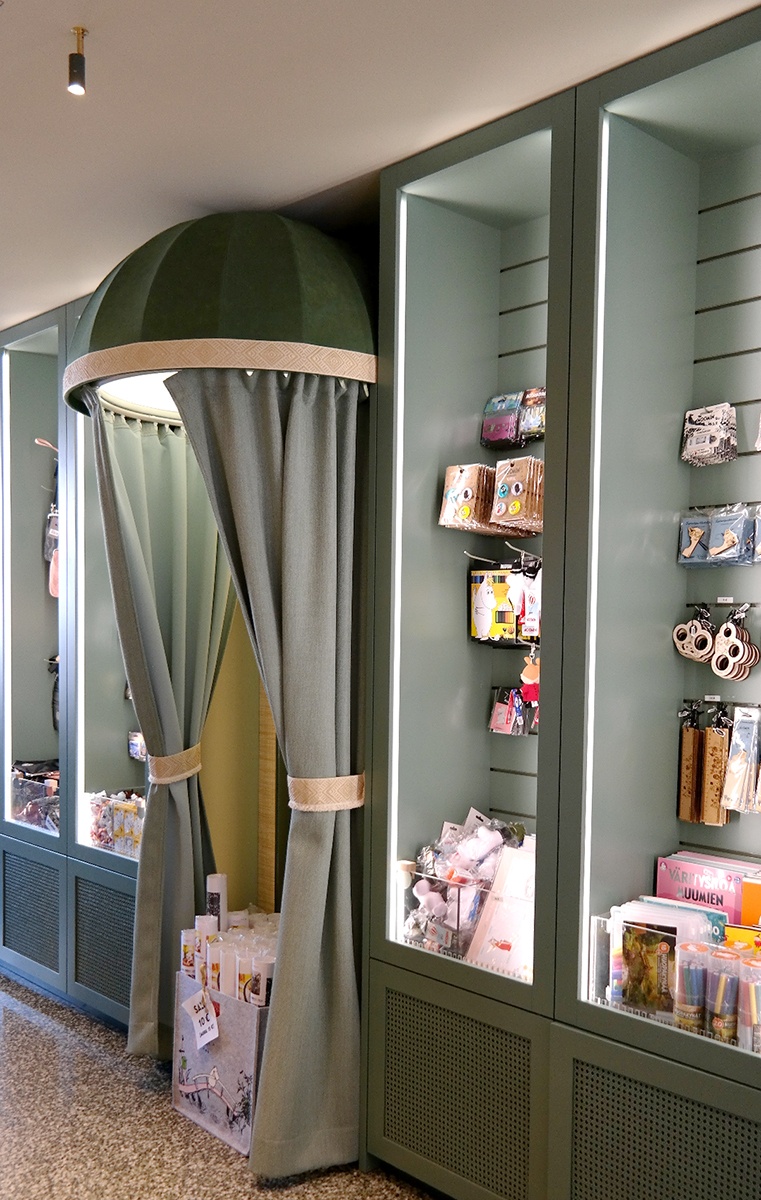 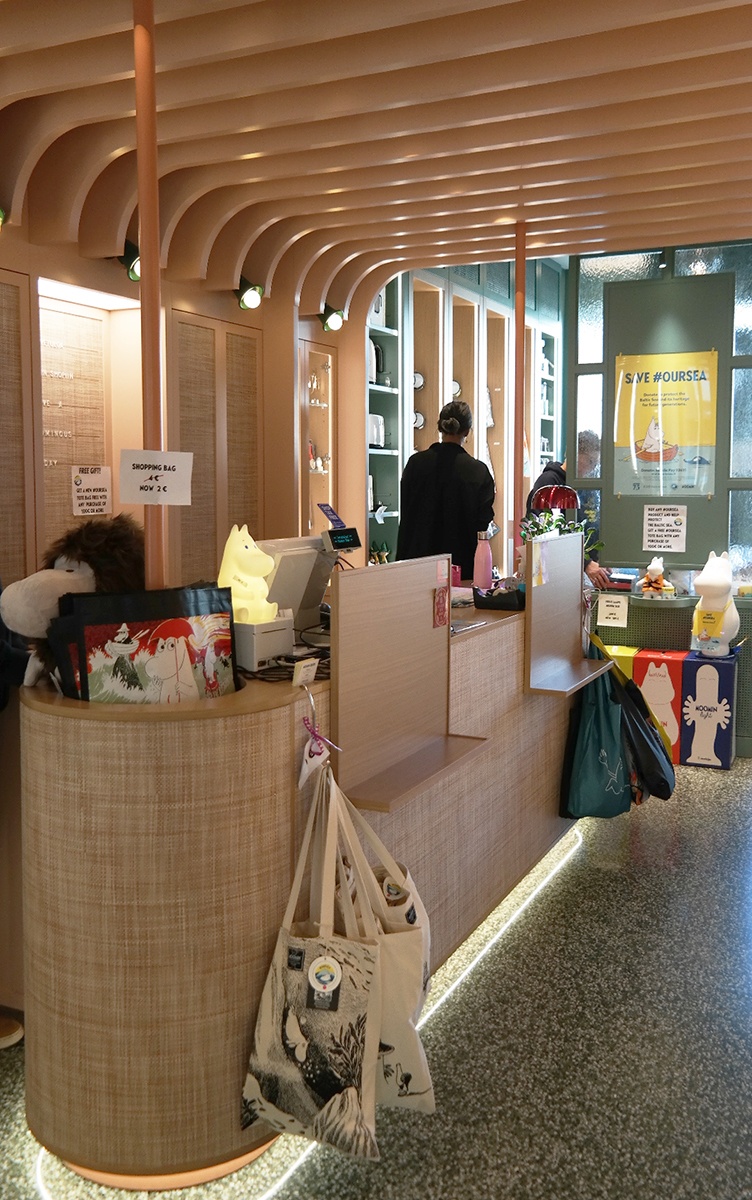 More photos from the store. 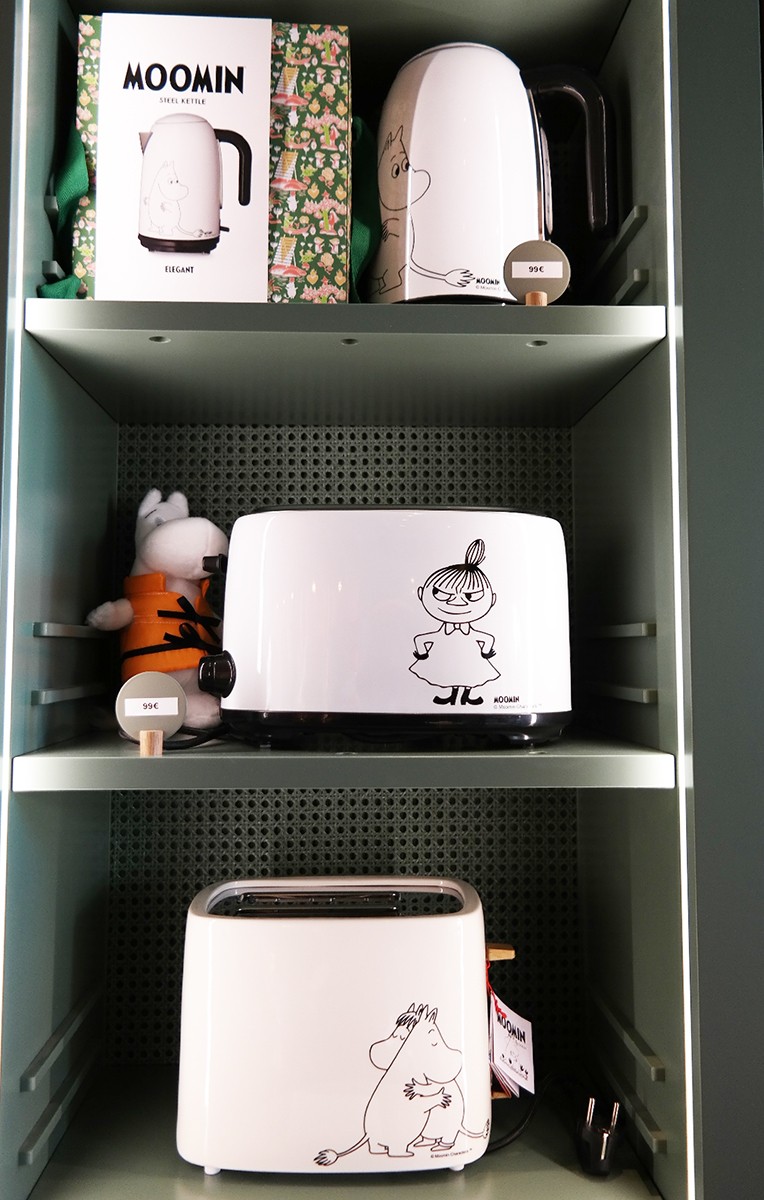 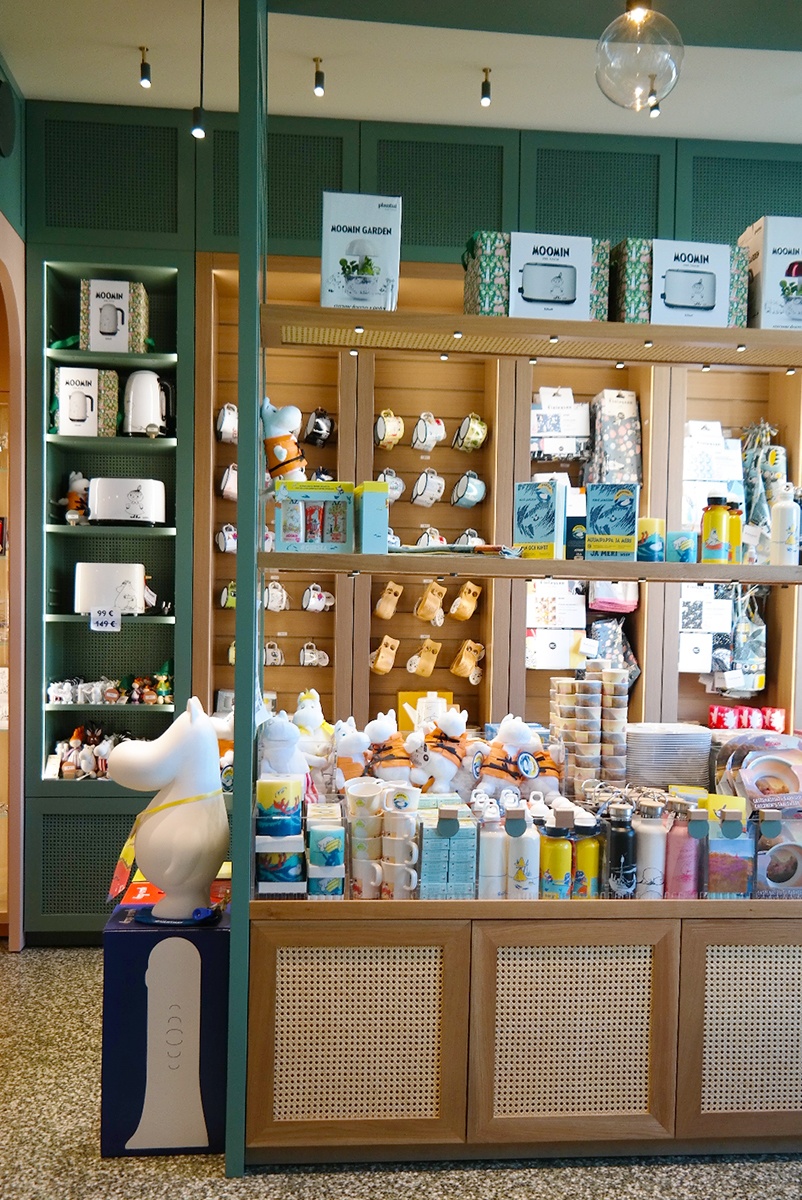 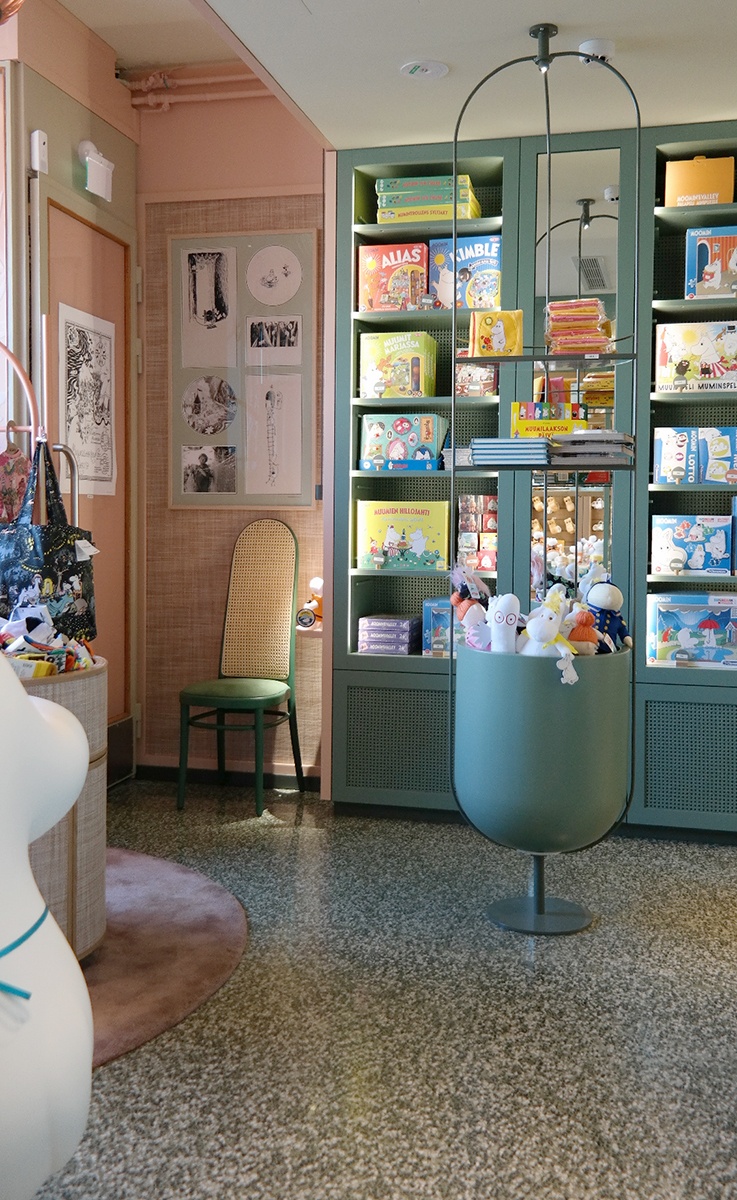 This year marks 75 years since Tove Jansson wrote The Moomins and the Great Flood. To celebrate the anniversary, Moomin Characters Ltd launched a year-long #OURSEA campaign with the John Nurminen Foundation to raise money and then save the Baltic Sea. Tove Jansson spent her life by the Baltic Sea – both in her hometown Helsinki and in Pellinge archipelago, which served as her summer home. The sea was always important to Tove Jansson, and you can easily see her love in the Moomin stories countless times.

“He came to the edge of the water and stood watching the breakers. There was the sea – his sea-going past, wave after wave, foaming recklessly, raging furiously, but, somehow, tranquil at the same time. All Moominpappa’s thoughts and speculations vanished. He felt completely alive from the tips of his ears to the tip of his tail. This was a moment to live to the full.” From the book “Moominpappa at Sea” by Tove Jansson, 1965. 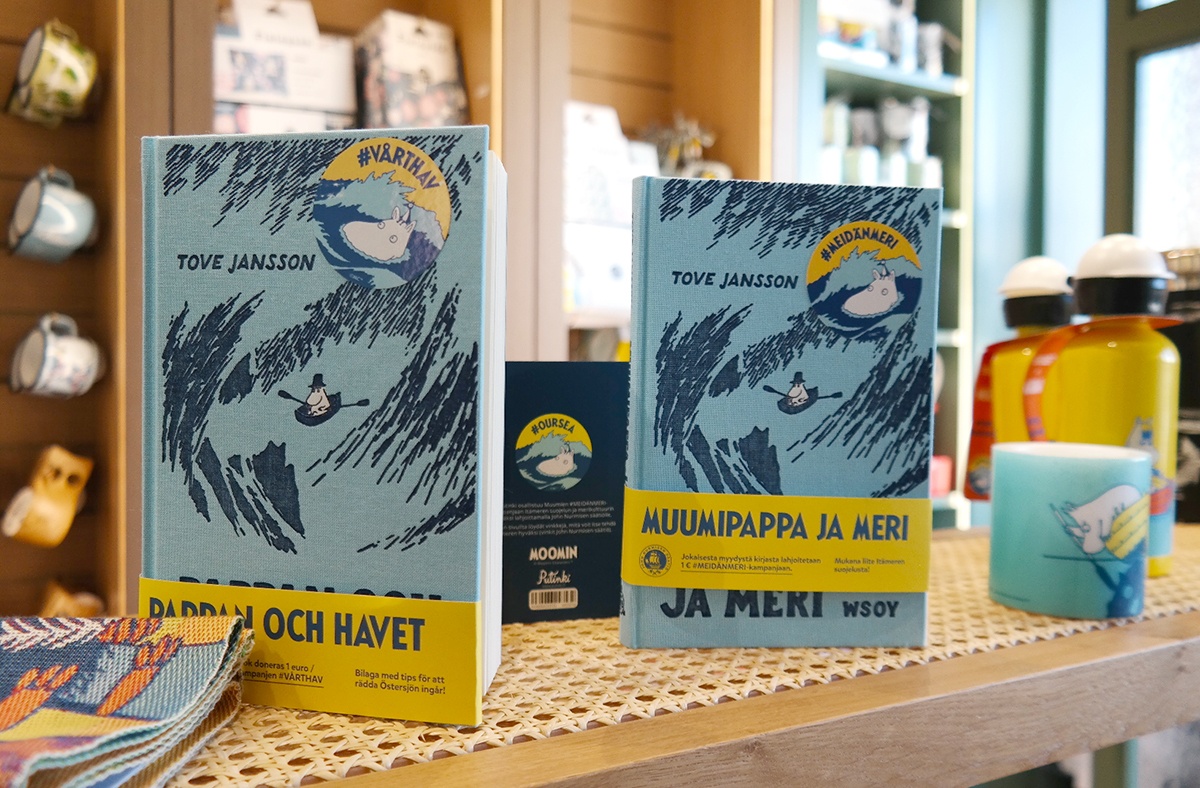 After Tove’s passing, the Baltic Sea has become one of the most polluted in the world and urgent action is needed. Eutrophication is the most significant environmental issue affecting the Baltic Sea. It’s caused by excessive phosphorus and nitrogen loads that end up via urban waste waters, rainwater from forests and fields, and to some extent from traffic. Climate change further accelerates eutrophication. Eutrophication is also one of the main threats to the biodiversity of the Baltic Sea: nutrient over-enrichment causes elevated levels of algal and plant growth, increased turbidity, oxygen depletion, changes in species composition and blooms of algae. The John Nurminen Foundation’s measures to protect the Baltic Sea have been extremely successful. Thanks to their efforts and working together with multiple partners across the Baltic Sea, the Gulf of Finland’s annual phosphorus load has been reduced by as much as 75%. This is a world record in marine protection! The Foundation’s projects aim to reduce the nutrient load to the Sea. They evaluate their Clean Baltic Sea projects and works on a basis of measurable positive environmental impact and assigns the donated money for work that puts it into most effective use. In just 15 years, the Foundation has started over 30 Clean Baltic Sea projects, of which well over 20 have been completed. In terms of environmental impact, they have accomplished the two most significant water protection efforts ever carried out in the Baltic Sea. In addition to environmental work, part of their work is preserving the seaside lifestyle as part of the culture. For example, the Foundation had published over 40 award-winning books in multiple languages giving a voice to people for whom the Baltic Sea is a vocation, a way of life, or a passion. So far the campaign has raised 591737€, removing 2367 tons of green-blue algae from the Baltic Sea! For a full portfolio of the Foundation’s activities, see www.johnnurmisensaatio.fi and then see the ways you can join the Moomins in supporting #OURSEA.   #oursea, FINLAND, Helsinki, moomin, moomins, muumi

Isabella Presnal is a Finnish-American videographer, who has been working in video production for years, from editing to filming to being an on-camera personality to producing large productions. She directed, produced, and filmed her first short film in 2016. She has done commercial work and news broadcasting. She has lived in multiple countries and consults brands about the generation Z mindset. She is a devoted vegan, sustainability and human rights activist, and likes Moomins. View all posts by Isabella Presnal
7ads6x98y