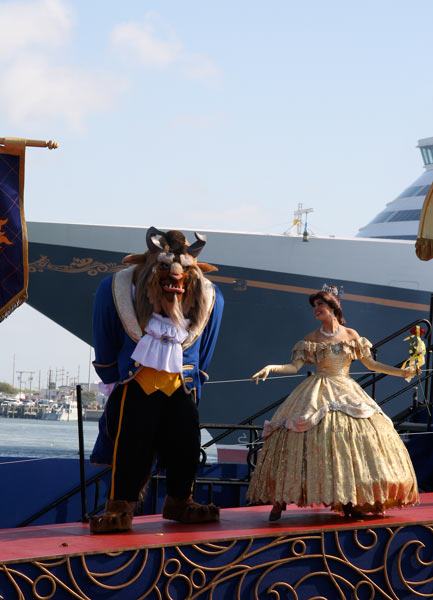 Read the Disney Dream special on Skimbaco blog network to get the scoop on the this beautiful new cruise ship with old world charm and feeling, with the newest technology and inventions. Disney Cruise Line’s newest and the largest vessel Disney Dream was christened on Wednesday morning on January 19th, in the sunny Port Canaveral in Florida. I was one of the lucky members of media to witness the fun yet heart warming event. We were escorted through a red carpet from Disney’s own ship terminal to the dock where a large multimedia display and stage was waiting for us – and the majestic Disney Dream was docked in the front of us. This was my first real ship christening event, even though I remember fondly how we named our boats when growing up. There has always been something mystical about the sea and the sailing vessels to me, and I couldn’t believe my luck to be part of the Disney Dream Christening event. Like Christening a child – christening a boat or ship is a tradition to bless the vessel, and the ship also receives a blessing from a godmother.

The event started with special remarks with Robert A. Iger, the president and CEO of The Walt Disney Company. The stage was taken over by a large scale musical and dance performance where the making of the Disney Dream Blueprints was illustrated. The show was like directly from Disney musicals and told a story how Disney Dream was a true dream come true, and enforced Disney’s mission to make everyone believe dreams come true. In this case, Dream literally came true, and the audience couldn’t but believe. 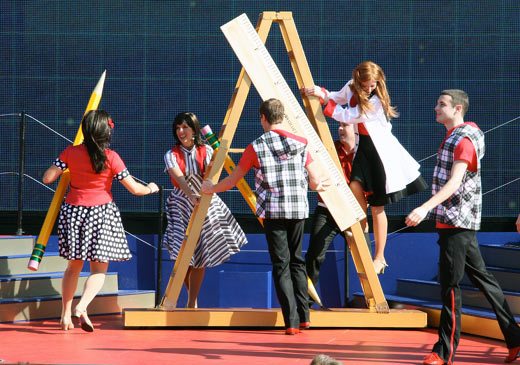 Next the stage was taken over by Disney’s beloved pirates from Pirates of the Caribbean and Jack Sparrow and Mickey Mouse were the stars of the action packed musical performance with smoke lingering around the stage. 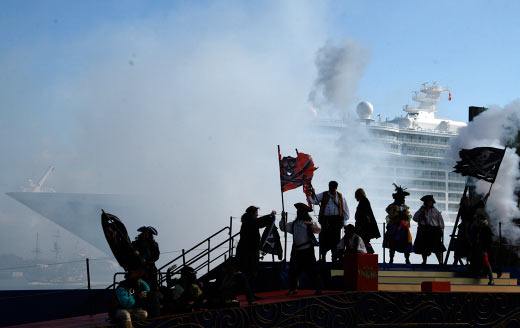 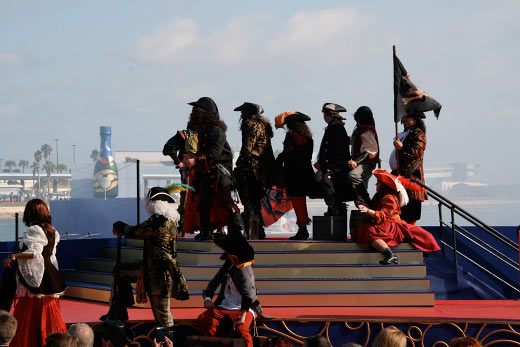 Gigantic inflatable champagne bottle was floating in the water in the front of the stage and Mickey Mouse was not quite ready to perform the christening and pop the bottle on the side of the ship quite yet. He told the anxious audience that the bottle had to be filled with dreams first! The Disney Dream represents not just a dream come true, but also dreams that will come true, and the show continued with more musical performances of dancers and all of the Disney princesses. 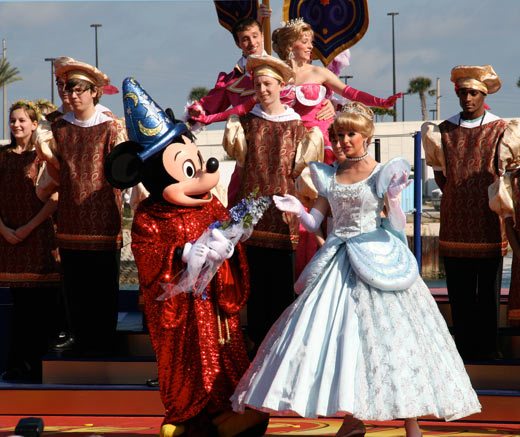 Mickey Mouse was busy introducing different “dreams” that were filling the large champagne bottle, and while the musical performances were Broadway style and Disney quality and truly amazing, I liked also the flag parade that included flags of all of the countries of the employees onboard Disney Dream, as well as the navy band playing. 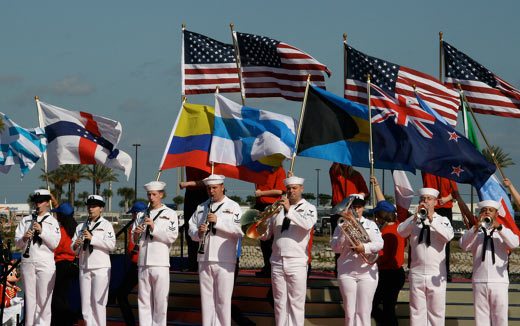 One of the very touching moments was also when the crew onboard was highlighted – and they were all on the verandas of the ship waving to us on the shore. This really describes the attention to the detail Disney has; every single member of the crew is top notch, and as important piece of the puzzle making the Disney guests have an experience they will remember for ever. 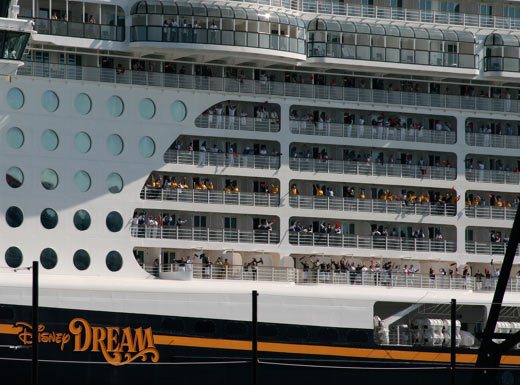 When Mickey Mouse announced the bottle was ready and filled with dreams, it was time to bring on the official godmother for the ship to perform the christening together with Tom Staggs, the chairman of the Walt Disney Parks and Resorts, and Mickey Mouse. Fairy Godmother showed up, and the audience got its biggest laugh when Tom Staggs said they were actually thinking of another godmother for the Disney Dream, and he also thanked Fairy Godmother for getting him his job. Finally it was time to introduce the real godmother for Disney Dream, Jennifer Hudson, whose dreams had come true, and whose singing career had originally started on Disney Cruise Line’s Disney Wonder ship as a performing artist. 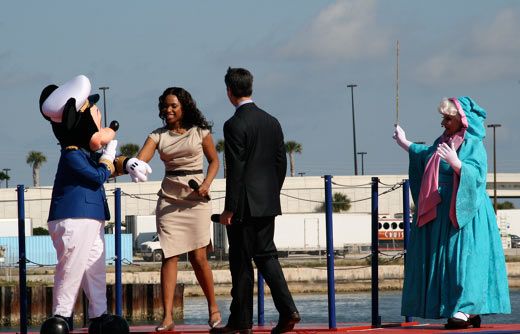 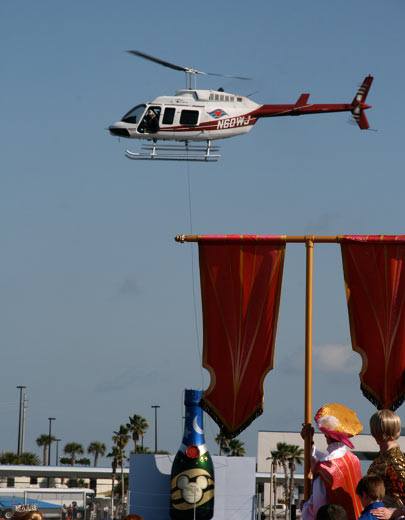 The helicopter flew the gigantic champagne bottle on the side of the ship, and it magically popped with confetti and sparks flying out and the ship was christened! Fireworks launched from Disney Dream’s deck in the grand finale of the christening. Disney Dream was ready to set to sail and everyone agreed with me – the event was something most of us had never experienced before. 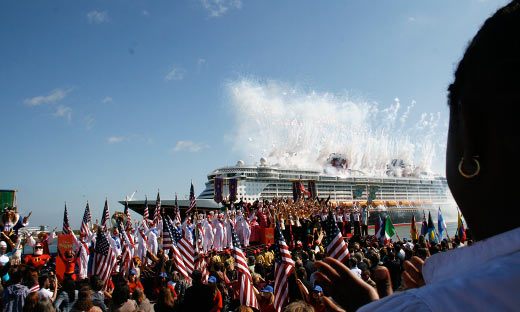 After the official christening event we were escorted back to the terminal to wait that the beautiful Disney Dream was ready for us to get onboard. The terminal was filling up with giddy excitement and we were ready to be amazed by Disney Dream. 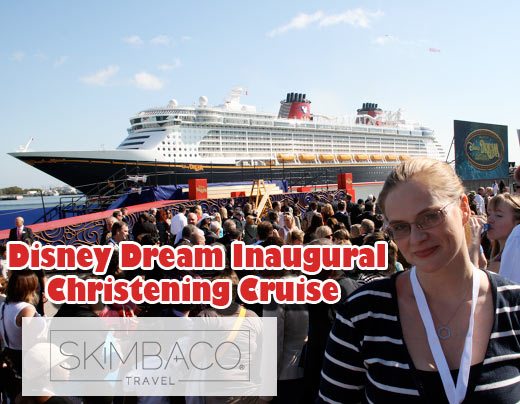 Make sure to subscribe Skimbaco Lifestyle, Skimbaco Travel and Skimbaco Home to get the full coverage of the Disney Dream. Full disclosure: Disney invited me to the christening cruise and all my expenses except the spa treatments were paid. My opinions are my own. cruise, Disney Cruise, Disney Dream, Disney Dream Christening, Inaugural cruise, TRAVEL