I had an opportunity to attend Disney Cruise Line’s Inaugural cruise on the new Disney Dream earlier this week. I will be covering many highlights from the trip and the ship itself the upcoming few weeks at Skimbaco Lifestyle and at Skimbaco Travel, but I wanted to share some of the more architectural pictures here. Disney Dream took several years to design, and every single detail is throughly thought of and the Disney imagineers were able to create a cruise ship with old world feeling that brings back nostalgic glamour from the 40’s but combined with the best that today’s technology and design can do.

When you step onboard the ship, this majestic three deck high atrium welcomes you, and you will immediately realize that Disney Cruise Line and Disney Dream is so much more than Disney characters, it is a luxurious retreat on water, and not just for the kids. An amazing chandelier descending more than 13 feet from the ceiling, and spanning more than 22 feet in width is a masterpiece sparkling with thousands of hand-crafted crystal beads. Reminiscent of early 20th century transatlantic ocean liners, contemporary design and Art Deco style grace the grand lobby to exude sophistication throughout.

Every Disney Cruise Line’s ship has a character statue in its atrium lobby, and the Disney Dream isn’t any different. Almost a five feet tall bronze Admiral Donald Duck stands atop a marble pedestal. Like the grand piano and the majestic staircase would add enough to the lobby, the Donald Duck statue brings in Disney magic and a great photo opportunity for the guests.

It wouldn’t be Disney without first class entertainment onboard. Disney Dream has two theatres onboard, and both of them are elegant and give the old Hollywood and Broadway feeling.

The restaurants are designed to full fill an appetite for design as well. The Disney Dream includes three main dining options, and two adults only fine dining restaurants. The Royal Palace is designed after classic Disney princess stories and you will feel like a princess yourself when dining there.

You are welcomed by marble floors and a “family crest” when you walk in to Royal Palace. Hand-painted potraits of the princesses delight the youngest ones in the family, and you will be blown away by the luxurious interiors including hand-blown chandelier, custom carpeting and iron railing. The windows are dressed in tiara-topped window valances, and the fluted columns in the space are modeled directly from Cinderella’s ballroom scene.

On the upper deck you can find the only premier dining option on the sea. Disney Dream introduces Remy, with a menu created by a Michelin-starred chef, view to the ocean, wine vault full of rare wines from all over the world, and interior designed to wow you and the experience transports you to France, just like in Disney’s movie Ratatouille. Remy’s classic French design features sinuous lines on chair backs, nouveau-style floral and leaf design carpet and the tables are set with Frette linens, Riedel glassware and Christofle silverware and china custom made for Remy. A private Chef’s Table offers a private premier dining option for eight in a room with Paris scene on the wall.

Disney Dream continues the magic and the luxurious feel even in the state rooms. The cabins are decorated with the charm of the old world, immaculately appointed staterooms feature a contemporary, Art Deco-inspired design and most of them have its own veranda – or extra Disney magic with Magical Portholes offering a “window” to the world with a real-time view outside the ship with animated pictures places on the top of the live feed. Disney Dream has two signature royal suites and the Roy O. Disney Suite below embodies the Art Deco glamour of the 1920s and 1930s. Extravagant details include a whirlpool hot tub on the private teakwood verandah, dining salon, pantry, wet bar and sweeping ocean views through floor-to-ceiling windows lining the main living quarters. 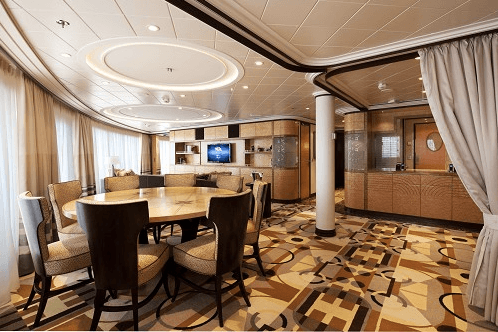 Subscribe Skimbaco Lifestyle, Skimbaco Travel and Skimbaco Home to get the full coverage of the Disney Dream. Full disclosure: Disney invited me to the christening cruise and all my expenses except the spa treatments were paid. My opinions are my own. cruise ship interiors, design inspiration, Disney Dream