Are you a Mermaid or a Whale? 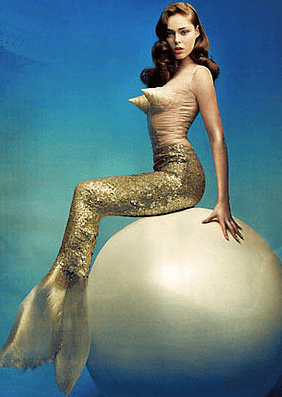 I saw this posted on Facebook by Delphine Fieberg with a great photo with it. A while back, at the entrance of a gym, there was a picture of a very thin and beautiful woman. The caption was “This summer, do you want to be a mermaid or a whale?” The story goes, a woman (of clothing size unknown) answered the following way: “Dear people, whales are always surrounded by friends (dolphins, seals, curious humans), they are sexually active and raise their children with great tenderness. They entertain like crazy with dolphins and eat lots of prawns. They swim all day and travel to fantastic places like Patagonia, the Barents Sea or the coral reefs of Polynesia. They sing incredibly well and sometimes even are on CDs. They are impressive and dearly loved animals, which everyone defend and admires. Mermaids do not exist. But if they existed, they would line up to see a psychologist because of a problem of split personality: woman or fish? They would have no sex life and could not bear children. Yes, they would be lovely, but lonely and sad. And, who wants a girl that smells like fish by his side? Without a doubt, I’d rather be a whale. At a time when the media tells us that only thin is beautiful, I prefer to eat ice cream with my kids, to have dinner with my husband, to eat and drink and have fun with my friends. We women, we gain weight because we accumulate so much wisdom and knowledge that there isn’t enough space in our heads, and it spreads all over our bodies. We are not fat, we are greatly cultivated. Every time I see my curves in the mirror, I tell myself: “How amazing am I ?! ” Now, tell yourself today, you are amazing, just the way you are. GET INSPIRED