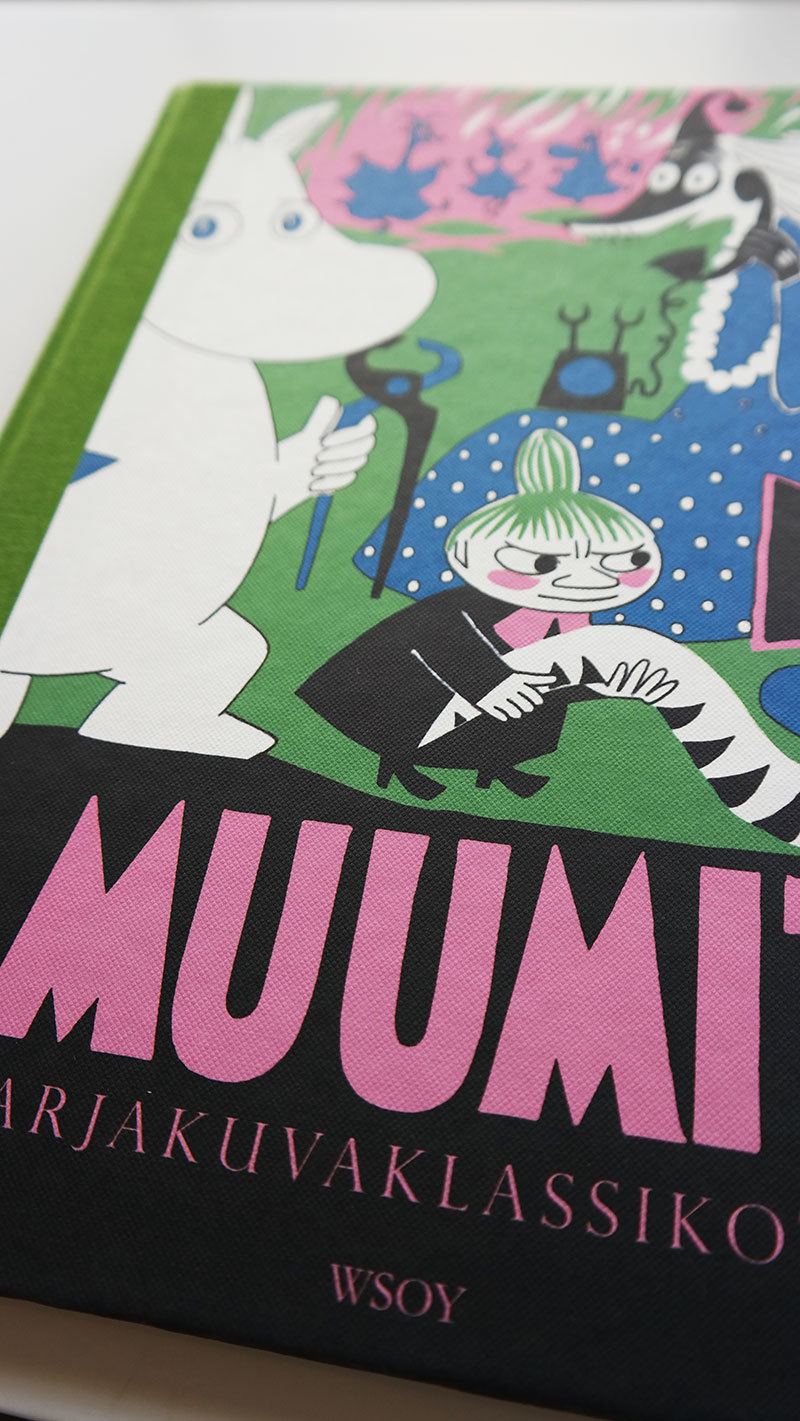 We recently visited the Arabia Factory in Finland. Arabia has been manufacturing Moomin mugs for decades, and held a Moomin Exhibition to celebrate the 100th anniversary of the birth of Tove Jansson, one of the most beloved and well-known authors and illustrators of Finland. The exhibition was part of the “Tove 100” portraying Tove Jansson’s art and life from different perspectives. We caught the last days of a Moomin exhibition in the Arabia Gallery during our factory tour and saw so many Moomin mugs we wanted to add to our own collection. Collecting coffee mugs runs in our family. I carry Starbucks mugs from around the world, and the children carry Moomin mugs from our trips to Finland (and they are widely available around the world too, but online shops might be your best place to find them). And it’s not just us that are affected by this coffee mug collecting bug, I bet the Arabia’s Moomin mugs are one of the top 10 collectibles in Finland, and it has spread all over the world, where Moomin fans live (especially in Japan), even to my sister-in-law in Texas, who started collecting Moomin mugs for her daughter as well. 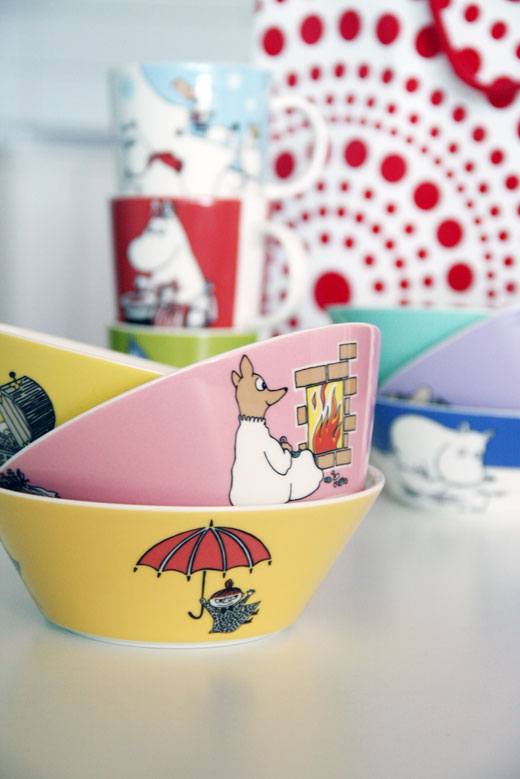 But who are these Moomins?

The Moomins (Muumit in Finnish) are the characters created by Finnish illustrator and writer Tove Jansson. The roundish hippo- or even white cow-looking characters are the stars of the original nine books, five picture books and a comic strip being released between 1945 and 1993. Later on the Moomins have inspired to several other publications, anything from self-help to cooking books to TV shows and movies. The books have been translated from the original language Swedish to 44 languages. The carefree and adventurous family live in their house in Moominvalley, though in the past, their temporary residences have included a lighthouse and a theater. 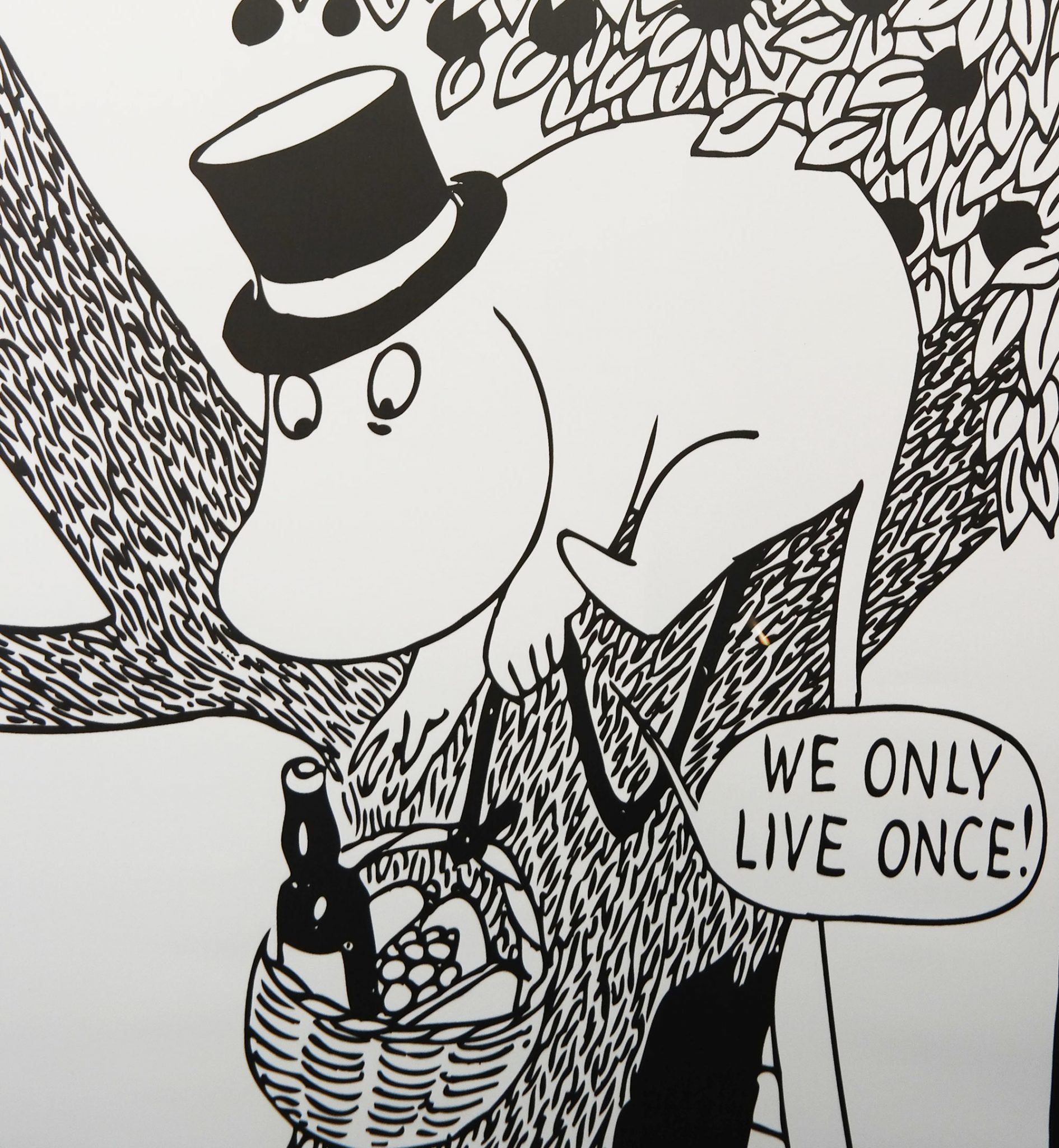 Moomins are the original Skimbacoers, finding the best of every situation, and living life to the fullest. The Moomin family’s friends are an eclectic group of travelers and adventurers who like to visit the Moomin family while they explore the world. Moominpappa is full of wisdom from his world travels and life experiences, and he likes to get philosophical at times, but he has never lost his boy-like joy of adventuring life. Moominmamma is always ready for anything, and especially when it involves food, and we all know that food is an important part of any adventure. Moomintroll is the son of Moominpappa and Moominmamma, and he is a happy boy trying to make everyone around him happy, although gets himself in trouble quite often too. But that’s part of life – how could you learn anything if you didn’t do anything wrong? Oh, and then there are Snufkin and Little My, who are polar opposites. Snufkin is a lonesome philosophical traveler, who wanders around the world with only a few things. He plays the harmonica, or goes fishing, and enjoys the simplified life. Little My is a mischievous tomboyish little girl, who lives in the Moomin house and has a brave, spunky personality. She loves catastrophes, and often does mean things on purpose. 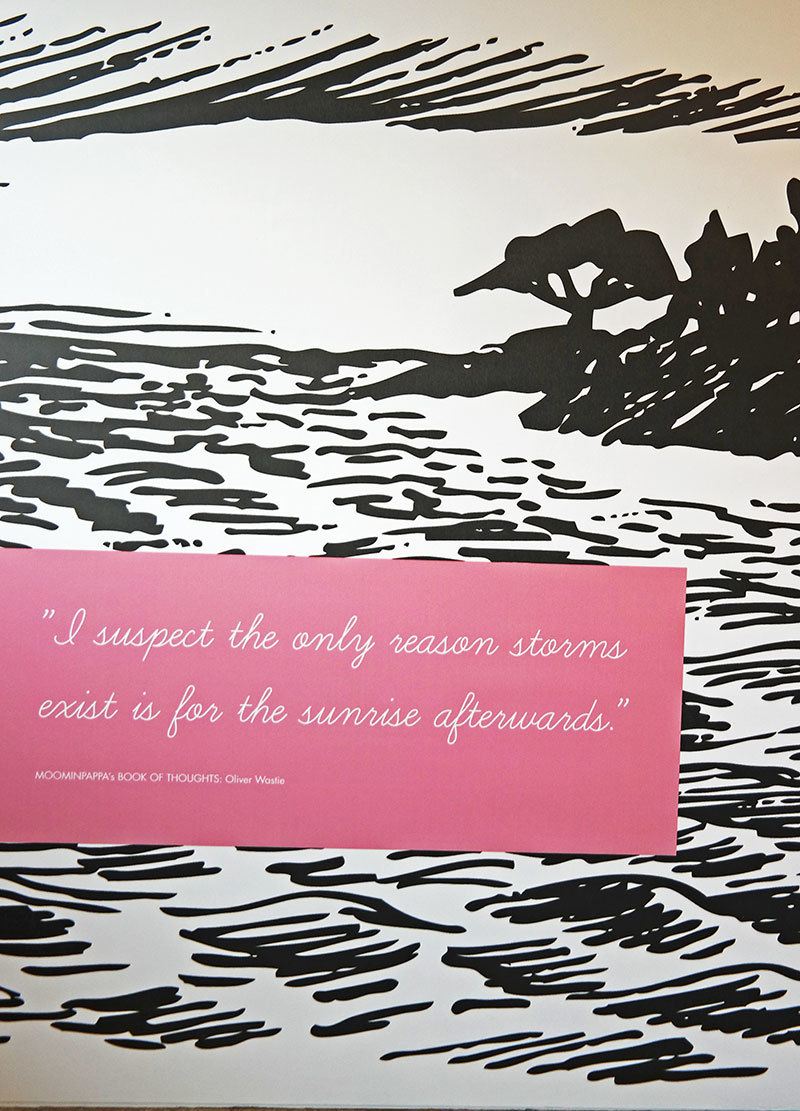 And there is so much more. While Moomin-books were meant for children and loved by children, their stories and life lessons have a deeper meaning that adults alike will identify with and are inspired to enjoy life despite the storms we may encounter in life. I personally like Moomin better now as an adult as I ever did as a child.

The creator of the Moomins, Tove Jansson was born on 9 August 1914 in Helsinki to a family of artists, and the 2014 is celebrated as her anniversary year. She passed away in 2001. Tove Jansson is one of the best-known Finnish artist in the world, and her work includes much more than writing the beloved Moomin books. During her first decades as an artist, Jansson produced not only paintings, but also an astonishing variety of illustrations. She continued to illustrate and paint even after the Moomin fairytales took off and as her reputation rose as a writer. Even her contemporaries saw that her tales from Moomin valley were not simple children’s stories, but presented an entire philosophy of life. The world of sympathetic Moomins was easy to enter, but readers found a deeper level behind the characters and their adventures: asking tricky questions and discovering the world with an open mind was the right thing to do. No wonder the Moomin characters have inspired many self-help type of books over the years, and an entire philosophy how to live life. And yes, even Skimbaco Lifestyle draws inspiration from Moomins and their adventurous life. The first Moomin book was not an immediate hit, but with the third story, Finn Family Moomintroll (1948), Tove Jansson’s reputation rapidly spread across the borders of Finland and Sweden. As early as in the 1950s, she made a distribution contract for the Moomin comic strip with the largest evening paper of the time, the Londonbased Evening News. Soon, the comics were read in more than 20 countries. Today the books have been translated into over 40 languages. 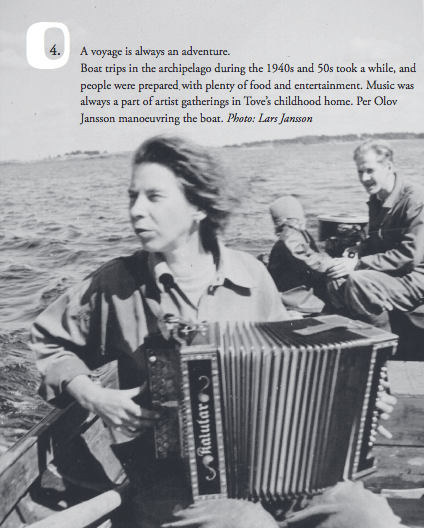 As the success of Moomin books and comics snowballed, Moomins became a phenomenon calling for Tove Jansson’s intensive participation all over the world. After the first wave, one generation after the other has eagerly embraced Moomins. Moomins have appeared in countless television, movie, theater and opera productions. A fame of such proportions was quite demanding for the artist. However, Jansson never secluded herself from her audience, since she understood that friends of the Moomins wanted to get to know the artist behind them. Typically, she wanted to personally answer each and every fan letter she received. 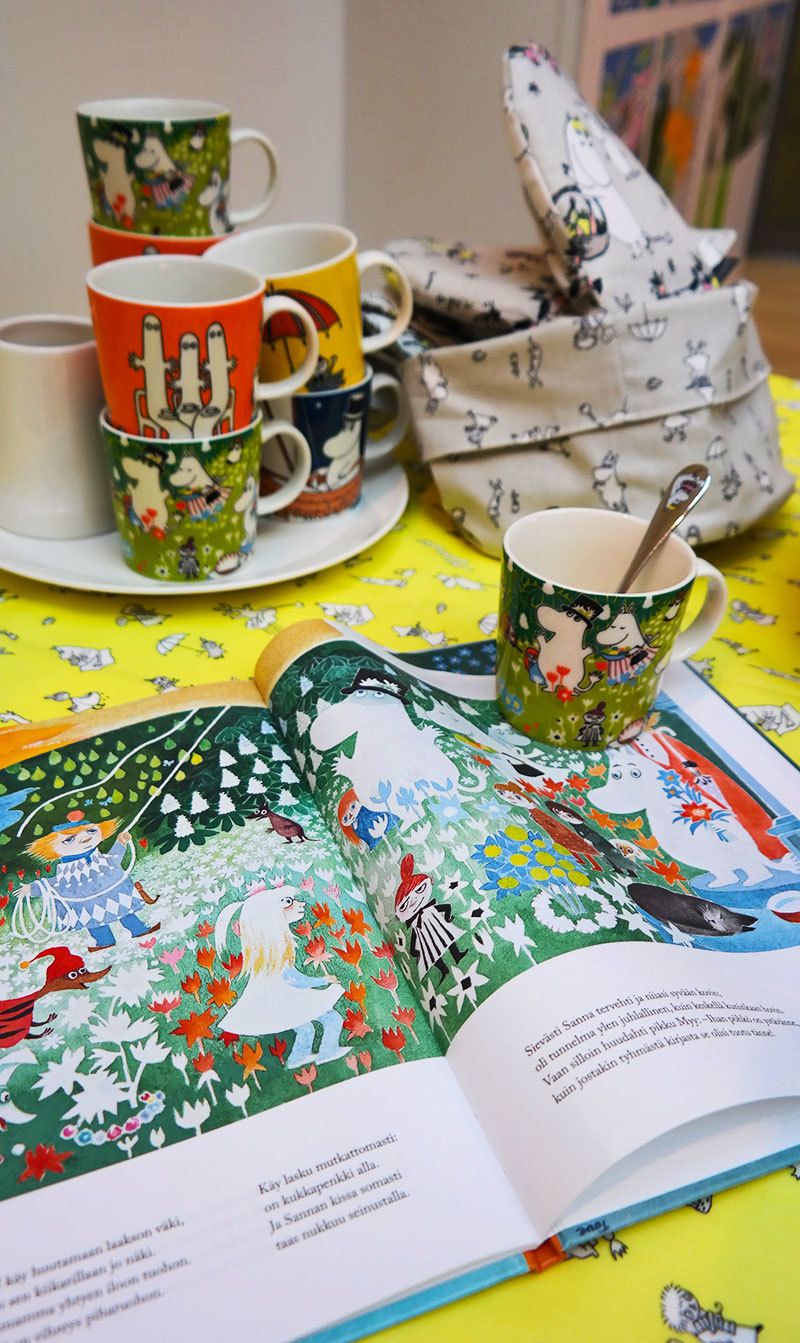 Arabia started producing home ware products with Moomin characters already in the end of 1950’s, but the raise of the Moomin really begun in the 1990, when Moomin became more popular than ever before, and the time was called a “Moomin boom” in Finnish culture. 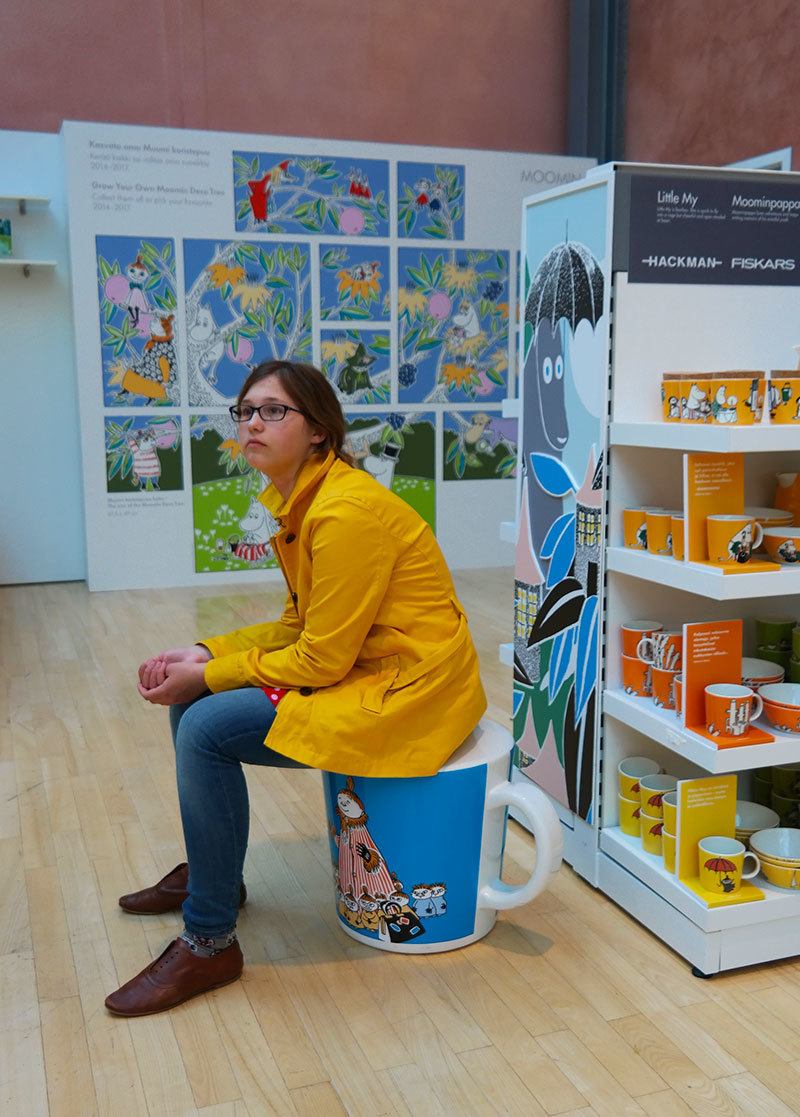 Ever since our children were young, I have been reading and telling them about Moomins, but I think they are just now starting to understand more of the deeper life lessons also included in the books, and starting to like Moomins more. 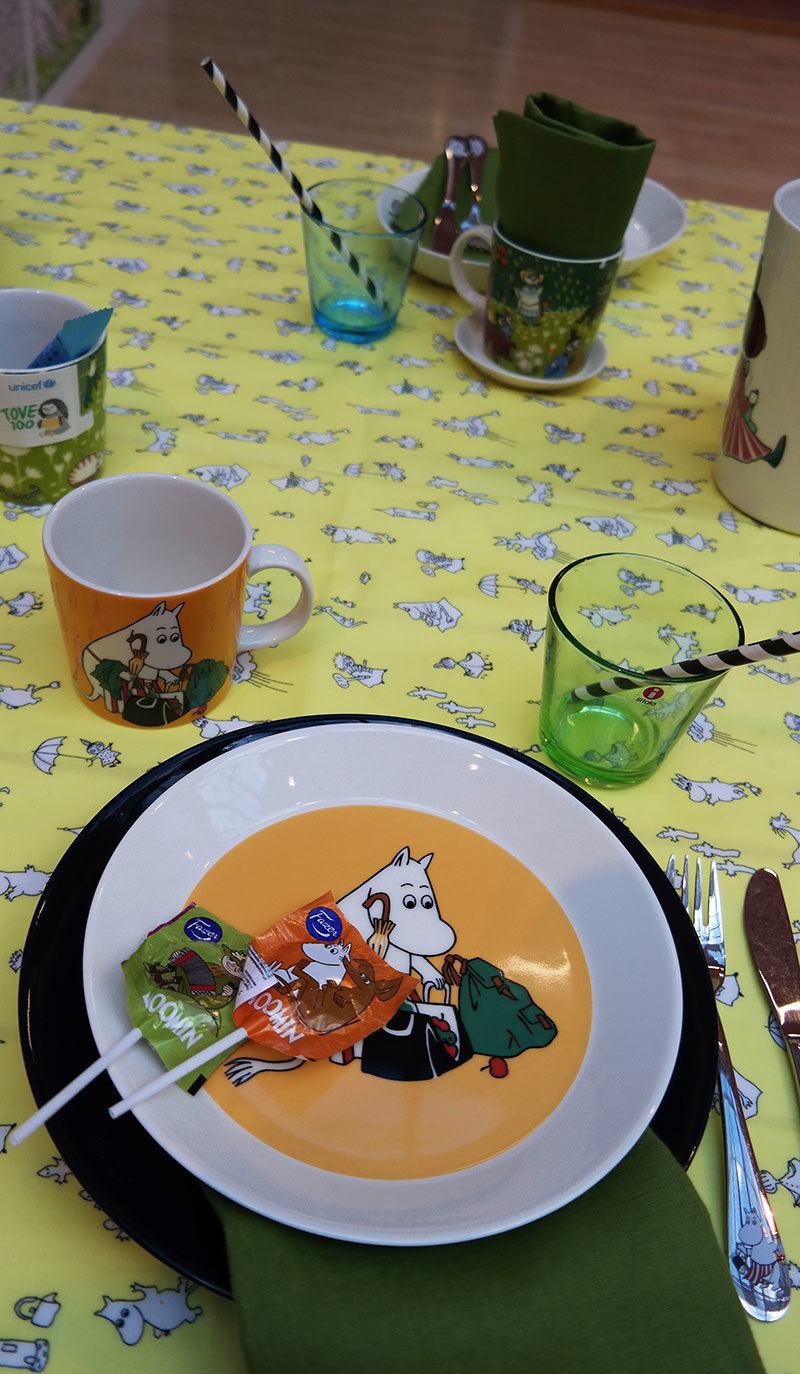 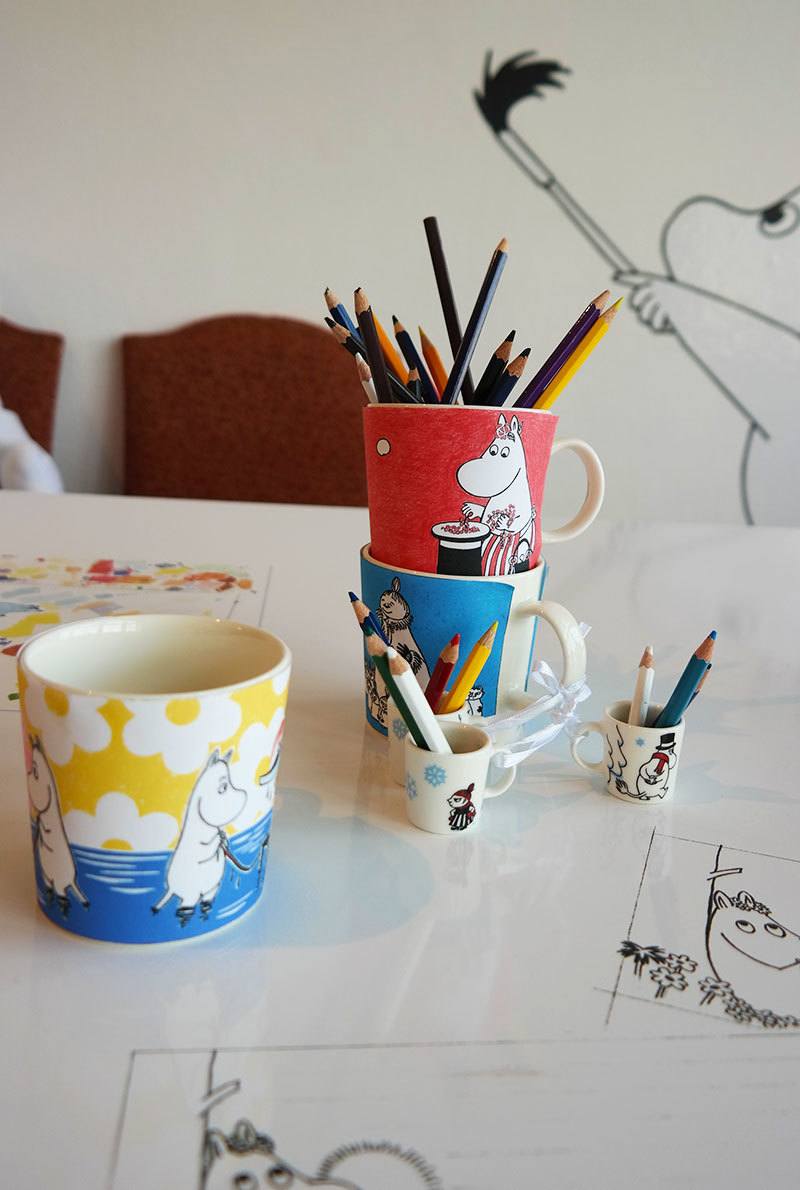 The Moomin Exhibition at the Arabia Gallery focused on the “Mugs that tell the story,” the Moomin mugs Arabia has produced over the years. 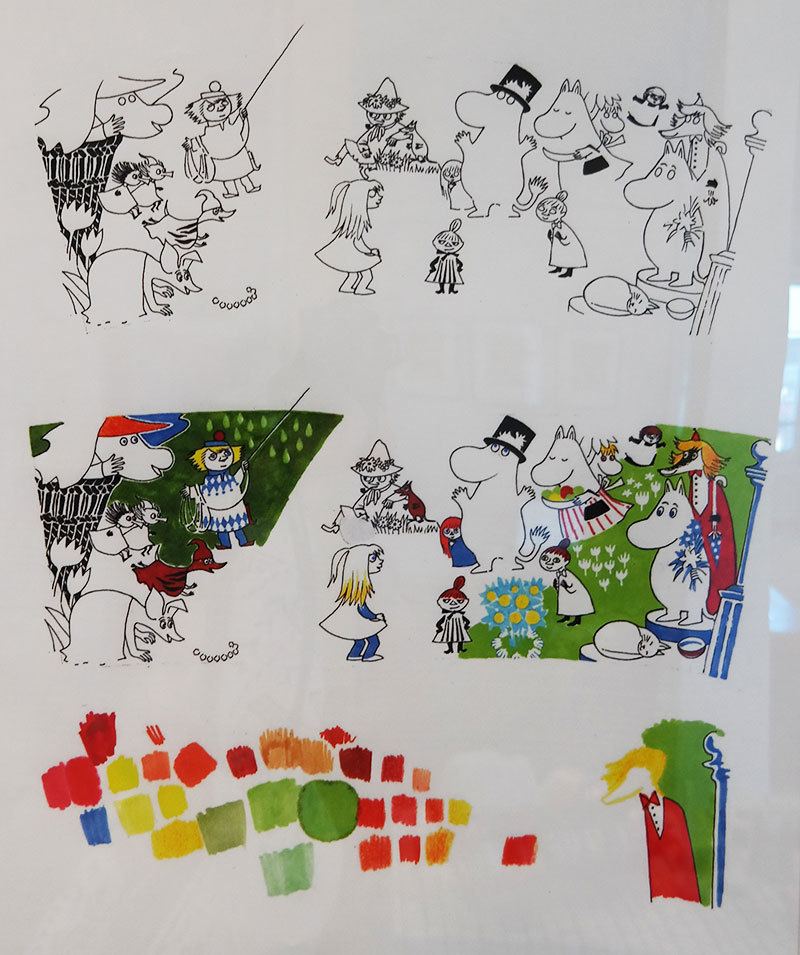 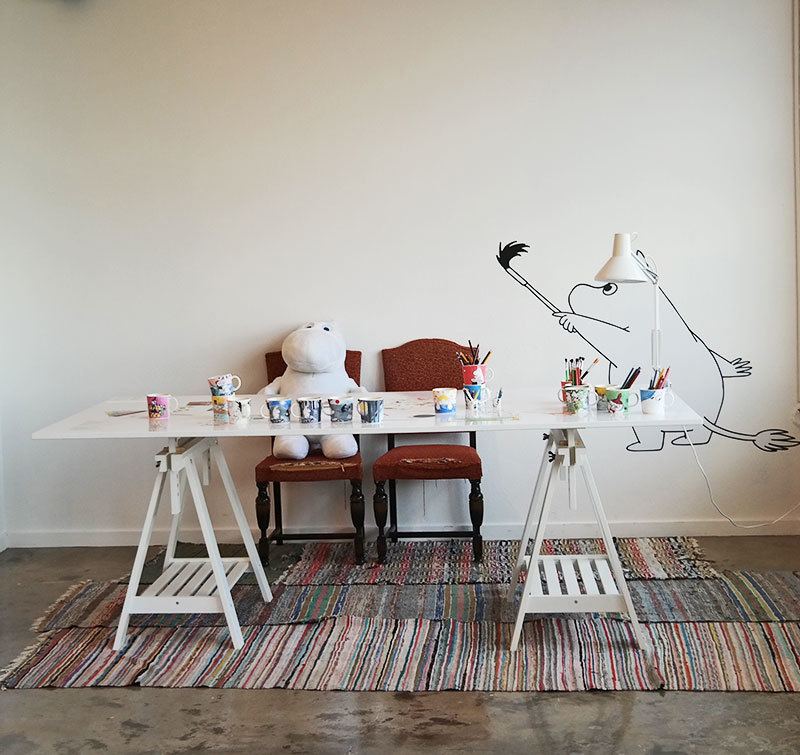 Each Moomin mug was secured inside a dome to assure the highly collectible mugs stay in the exhibition. 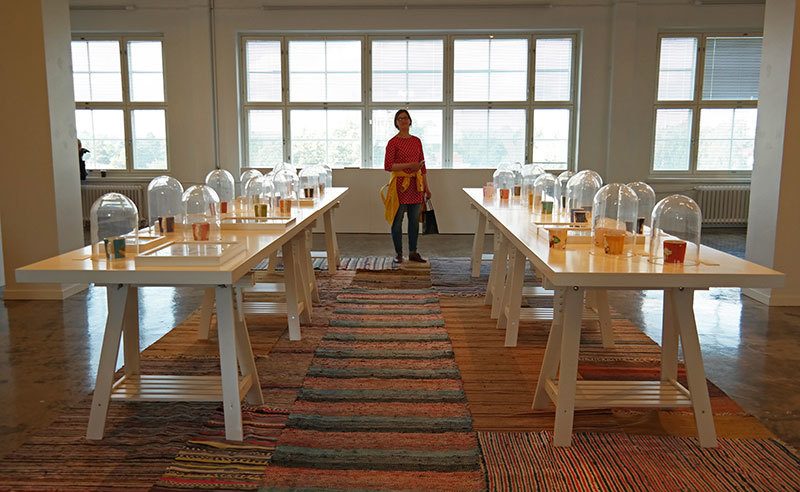 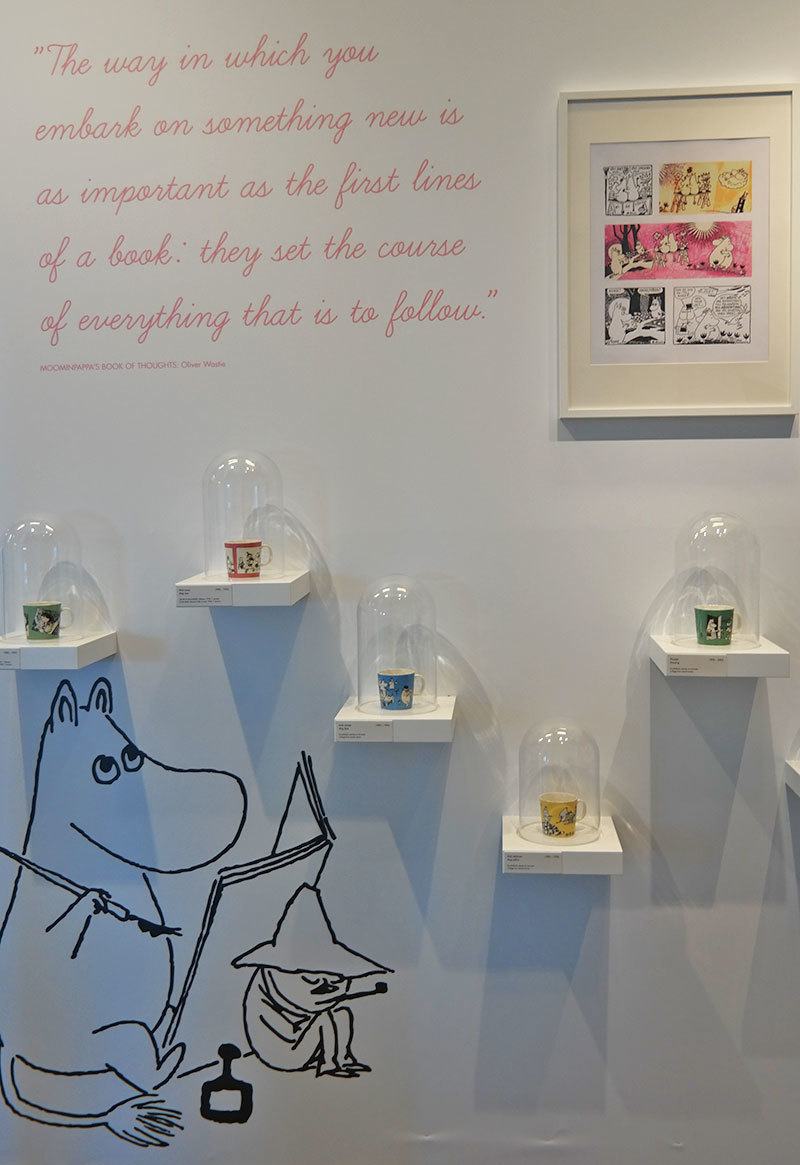 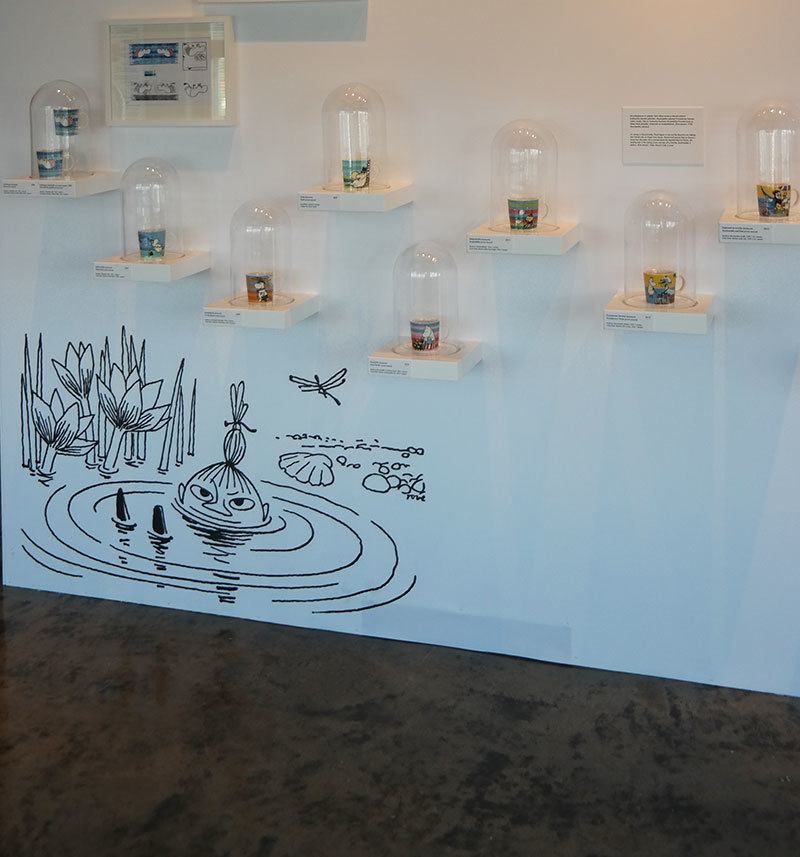 The pictures between the mugs tell a much more detailed story how the Moomin characters turned into figures in the everyday dishes. 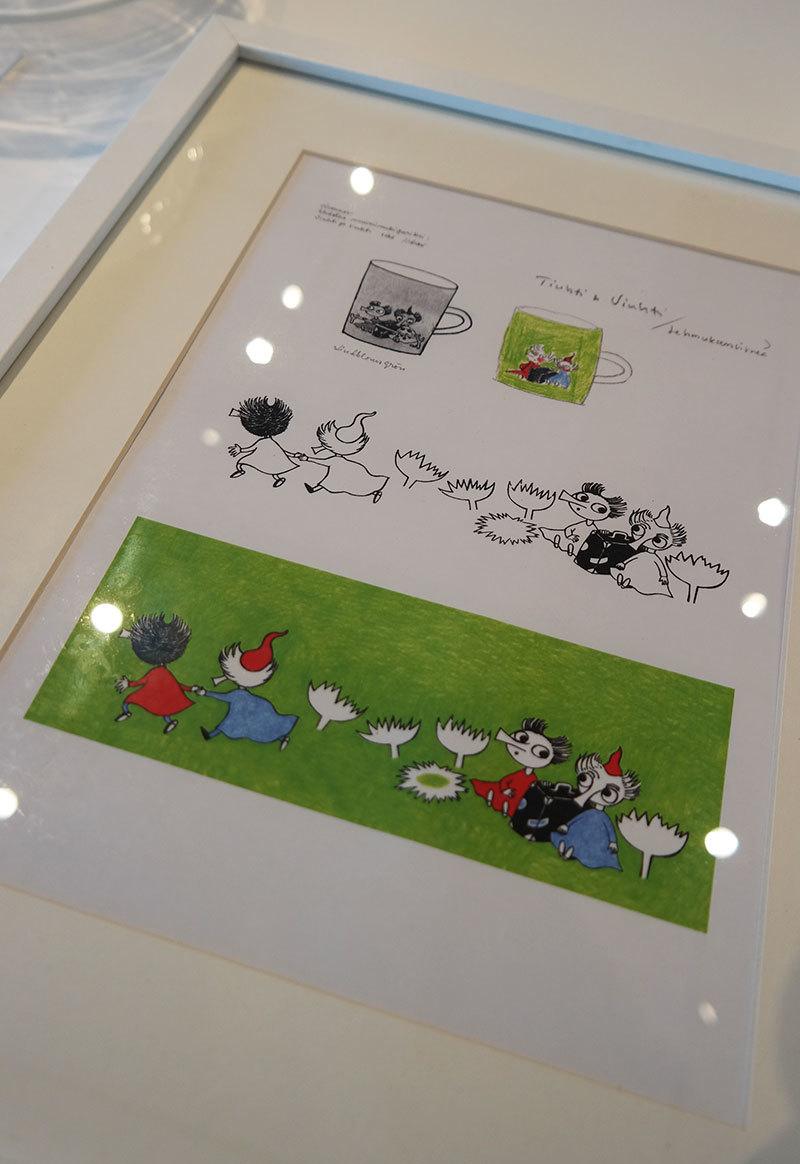 Are you familiar with or a big fan of the Moomins? Sources: Tove100.com, Arabia.fi.