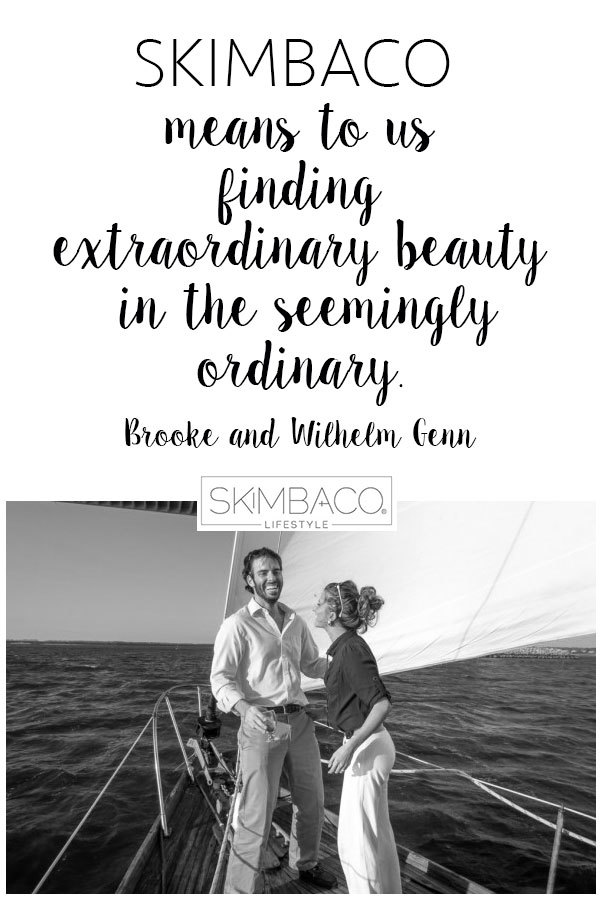 Living a Skimbaco Lifestyle is about truly embracing where you are – whether that’s a certain season of life, or a particular part of the world! For us, this means finding extraordinary beauty in the seemingly ordinary – It helps us enjoy home as if we’re just visitors, never taking for granted what’s in our own backyard! It also means creating a silver lining when adventures don’t go as planned – This mentality helps us take delight in the little things, and live life to the fullest whether we’re on a walk in our neighborhood or breathing in the fresh air of a foreign town! 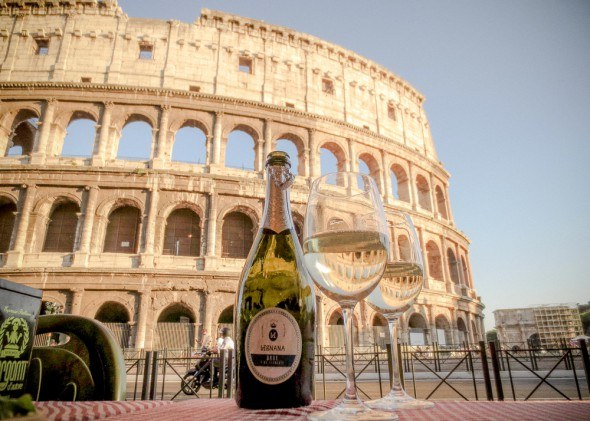 1. Embracing the heat in Rome

For a brief moment we felt as though all hope was lost for our Roman adventure. It was the first day of our honeymoon – we arrived, excited to see the sights and spend the days skipping through our first European city hand in hand… One step past the threshold of the airports automatic doors and we realized “hot” would be the understatement of our trip. Turns out, the temperatures were to hit nearly 105 ˚F every day during the week! We tried it out for one afternoon, but knew it wasn’t feasible – melting away was neither romantic nor fun! We decided to embrace the time difference and sleep the Roman days away. Then, we explored the city by moonlight, strolling hand-in-hand as we enjoyed the Eternal City, all to ourselves! 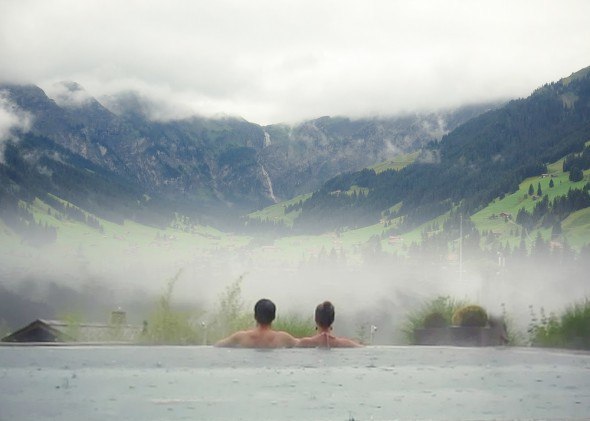 We had just enough money to scrape up two days in Adelboden, Switzerland… What had seemed like a great idea at the time was feeling less and less worth it, as we began the journey from Paris. We went from one confusing train/bus station to the next, never fully sure we were hopping aboard the correct machine. We didn’t have the time or money to spend on getting lost at this particular juncture – but we embraced the ride, literally and figuratively! We made friends with a madman and a group of nuns on our travels (a friendship built on hand gestures and kind smiles, of course – as these were the only common languages amongst us) and were eventually ushered out of the final bus’ doors and into the crisp air of the Swiss Alps. Our visit was regrettably short, but it remains a favorite of ours – Adelboden was well worth the exhaustion & confusion. It is one place we would love to revisit, see more of, and eventually spend an anniversary exploring! 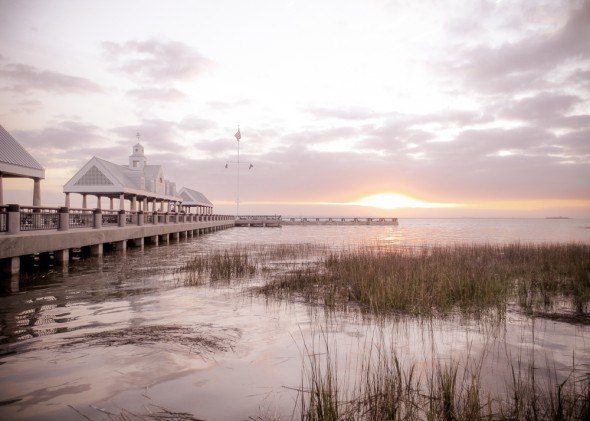 We became engaged on a relaxing trip to Charleston, South Carolina in the spring of 2013 – and, if for no other reason, it was obviously a trip to remember! Reminiscing on this adventure, however, the memory that stands out is not the proposal – but the sunrises! We recall getting up each day, without fail, to watch the sunrise over the Charleston Harbour. We can still feel the cool, damp mornings, and visualize the cloudy but colorful skies that would illuminate as the days came to life. We sat wrapped in a blanket, on the pier, as the wind whipped by us – not a soul in sight. We lived life to the fullest that entire trip, never missing one sunrise or sunset together. Thinking back on this Skimbaco Moment reminds us that, often, the little things in life are actually the big things in disguise. 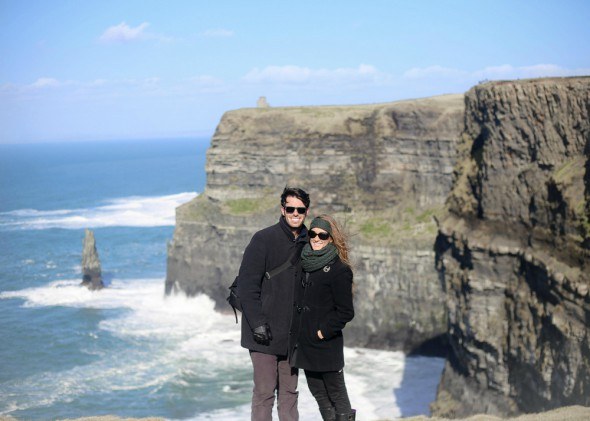 Our first week in Ireland had been wonderful, but whirlwind – Trying to fit absolutely every sight in Northern Ireland into such little time was wearing us down, we began to feel exhausted, and ready for a break… We hadn’t planned on seeing the Cliffs of Moher as we headed down the West Coast. We had seen so many beautiful cliffs along the way – We decided to pass these up, in the name of creating some downtime. When we had a hotel mishap on our final night in Galway (think 3am arrival at a prepaid, five-star hotel, only to hear the online reservation had been overbooked and the only other option in town was going to cost 400€) we figured, why not drive toward our destination until sunrise – which turns out, would land us at the iconic Cliffs of Moher! We spent the entire morning marveling at the rugged beauty – The weather was stunning, as it’s quite rare to see such beautiful light and color at the Cliffs. It was a perfect day, and we’re glad we decided to forgo a good nights rest in exchange for this lasting memory! 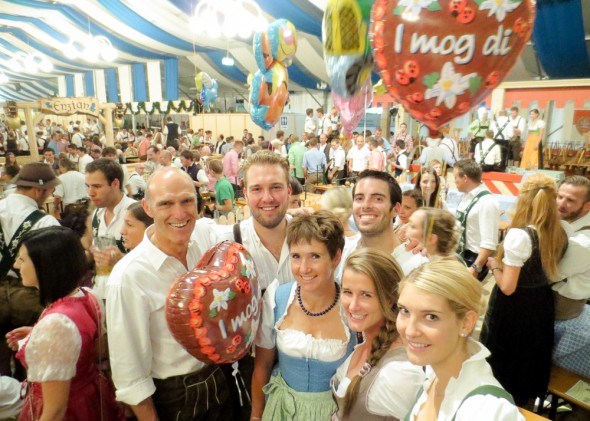 We had plans to be in Munich for just a few days on a trip to Europe, neither of us had ever visited. When we heard a cousin (of Wilhelm’s) was in Munich, but driving to Kempten for an annual festival – we couldn’t help ourselves… We hopped straight off the train and into her car. We headed for Kempten (south-west Bavaria) where we experienced the most joyous and authentic beer festival one could dream of! We drank and danced and sang, along with our beloved family, in a place we had never been but that felt a bit like home. Absolutely priceless. 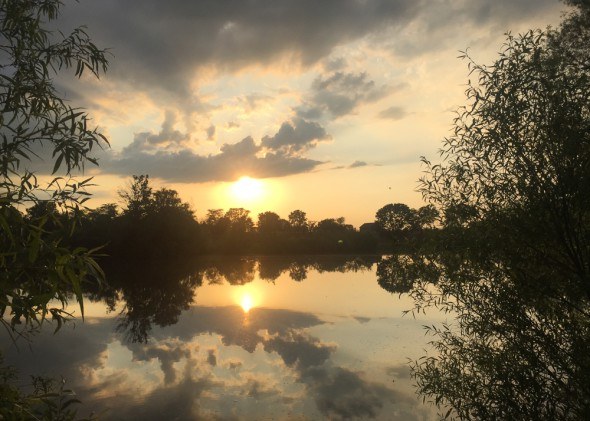 When we started dating, we were both living back home with our parents (after independently dragging university out for nearly double its intended time). To steal away moments for ourselves, we would take a bottle of wine & plastic cups up to the lake by my parents home. We would sit there on a bench, or in the car, talking for hours – sometimes until the sun came up! This need to create time for ourselves, in order to get to know one another, helped us develop a great knack for communicating with one another through spending quiet, quality time together. It is still a part of how we recharge – We often take walks, no phones, no cameras, no distractions. We simply walk, chatting about anything and everything but life’s daily tasks. 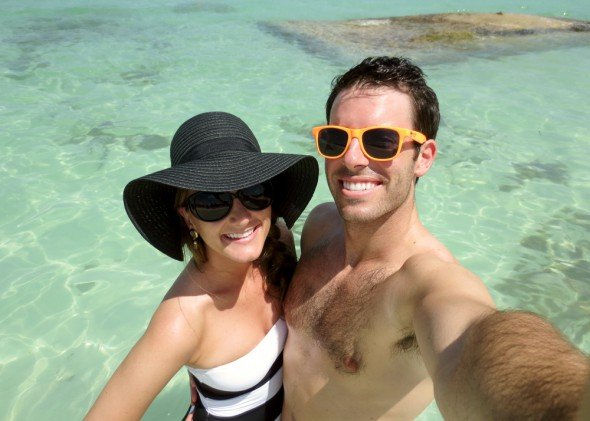 Again, we had scheduled a whirlwind weekend with too much planned to pack in… (so much to do, so little time!).. We had chartered a fishing boat for a half day on the Gulf of Mexico – it was Sailfish season! We both did quite a bit of fishing growing up, we both enjoy a day on the water, but neither of us had ever been the organizer of such an adventure. We booked our fishing guide based on raving e-reviews, but hadn’t thought to check out the specifics on the boat. Turns out it was an itty bitty boat… and the waves that day were pretty monstrous (or at least they felt like it!). The captain recognized our miserable state (we’ll spare you the details, but it was quite clear we didn’t have our sea-legs, nor were we going to adapt after such a rough start!) – He offered to take us somewhere calm to swim. We agreed – and though we had no swimsuits, we dove into the crystal water, fully clothed, and went with it… moments later we were face-to-face with an enormous, and equally beautiful sea turtle! The stunning creature swam along with us for the rest of our adventure – Just when you’d think he had lost interest in the big white aliens swimming with him, he’d reappear inches from our faces! He allowed us to pet him and even hold on for a moment as he swam us along with him. It was hands down the most genuine, beautiful and unexpected moment we have ever encountered on our travels. We have no documentation of it, (as we hadn’t anticipated we’d need underwater gear) but the memory lives vibrant and ever-colorful in our minds! This Skimbaco Moment was a great reminder that sometimes putting the camera down and embracing whatever situation presents itself can be the most rewarding travel experience one could hope for! 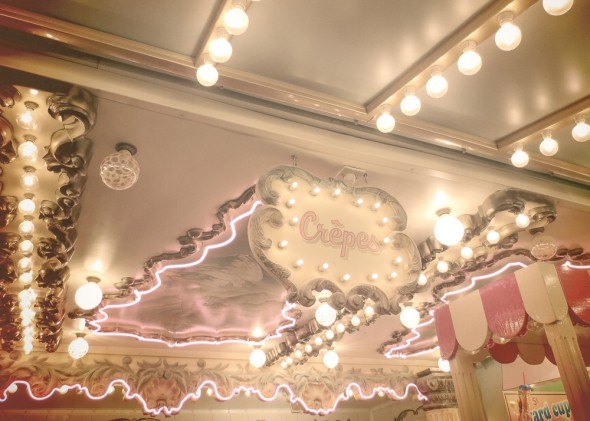 We spotted a carnival happening in the Tuileries Gardens and we made a bee-line! We love the sights, sounds and smells of the crazy carnivals at home in the States, so we knew we’d appreciate a French spin on the subject! Though we certainly participated in more cultural things whilst in Paris, we most enjoyed chowing down on Grand Marnier crepes as we threw darts at nearly-deflated balloons and gazed out, over the city, from the heights of the ferris wheel! 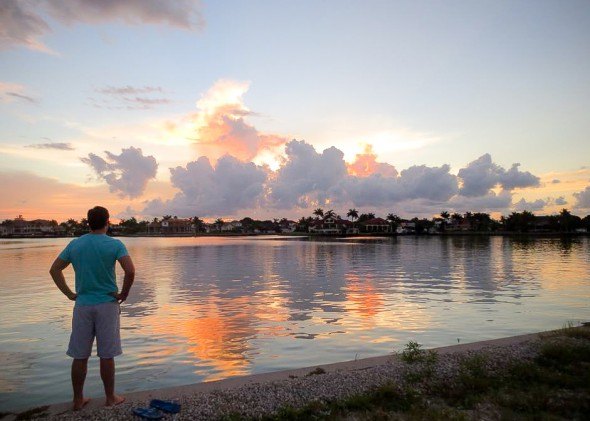 9. Feeling The Rain on Marco Island

It turns out we were married during monsoon season (okay, they don’t really have monsoons, so much as lots and lots of rainfall) on Marco Island. (Poor planning? Maybe. Truth is we were just so excited to start our lives together that the seasons weren’t taken into much consideration when we planned the start of our forever!) We were remarkably fortunate that it didn’t rain during our wedding ceremony in 2013, but when we ventured back to the casual yet upscale island of Marco to celebrate one year later, it rained the entire time! We enjoyed the many colorful sunsets the storms brought in and even found tranquility in watching the sky let loose from our sheltered spa. We embraced Bob Marley’s attitude on the subject, “some people feel the rain, others just get wet”. Here’s to feeling the rain! (PS We’re heading back to Marco Island this month for our 2nd, we’ll keep you posted on the rainy-day-details!) 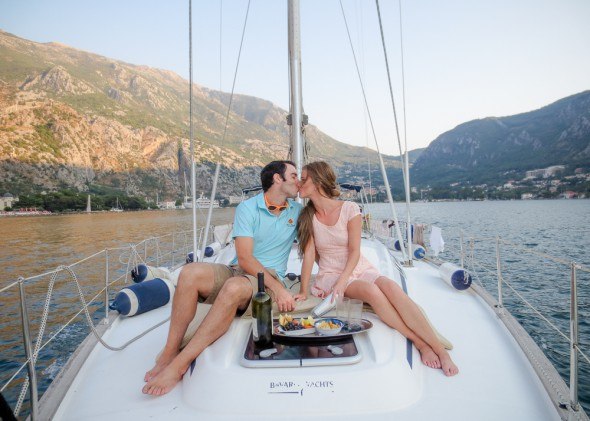 We splurged in Montenegro. We spent an entire evening, and far too much money to charter a private sunset cruise through the waterways of the Gulf of Kotor. We cherish this memory so much, and though we could have stayed an extra two days for what we spent, it was worth every dime to watch the sunset in such a magnificent fashion – with the only familiar thing about the setting being one another! 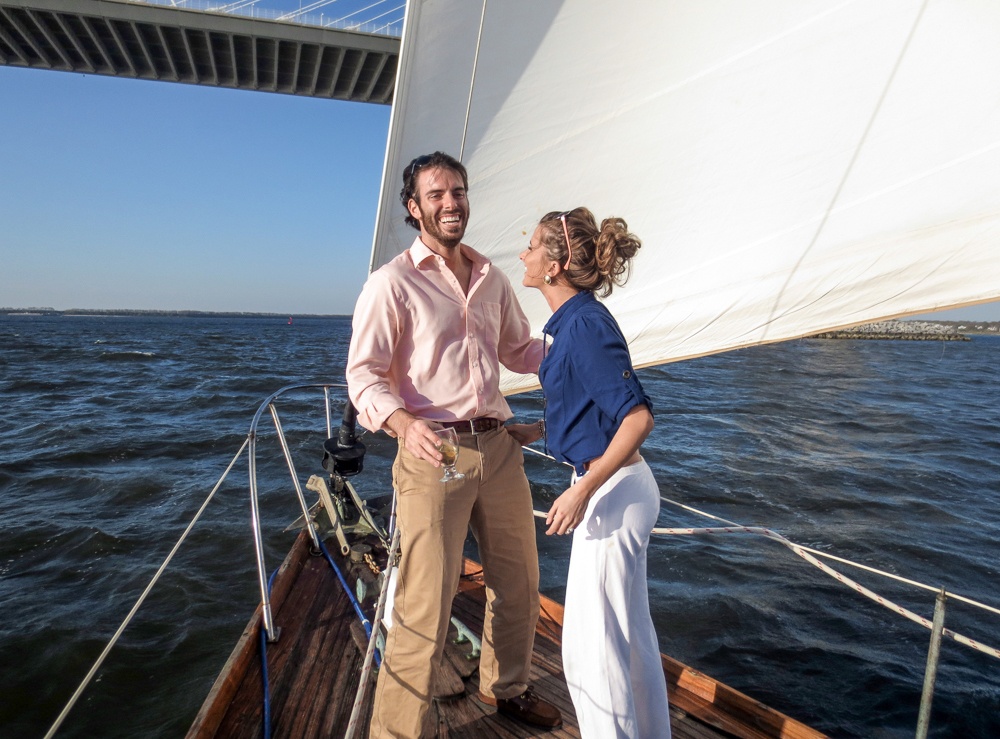 We are storytellers & photographers, owners of Nomadic Newlyweds – Lovers of love, travel and art! We’ve been searching for and creating adventure since the moment we met – This thirst for life plays a key role not only in our relationship but in our business. While, between the two of us, we’ve once been involved in everything from economics and psychology, to design and culinary arts, our passion for living full lives through creatively sharing the world with others is what truly drives us. Telling a story that inspires you to embrace each moment is our ultimate goal. Let’s connect! Visit Nomadic Newlyweds’s profile on Pinterest. Visit Nomadic Newlyweds’s profile on Pinterest. dream travel, Europe, living life to the fullest, nomadic newlyweds, SKIMBACO, TRAVEL

View all posts by Brooke Genn