When I was a little girl, my mother would make stacks and stacks of little crêpes, lettu in Finnish, for all of us kids to enjoy. She would stand by the stove for an hour just flipping them one after another in her pancake pan, that made 7 little crêpes at once. When I moved to the US and became a wife and started my own household, I searched for a similar pancake pan so I could make similar crêpes. I had also never made American fluffy pancakes and making them scared me and I wanted to try making them with a pan that would make perfectly round pancakes. I couldn’t find a Swedish Pancake Pan anywhere in the stores, but I found the above cast iron one from an antique store. Now they are widely available in cookware and home stores. It is also called a Plett Pan. We ate the lettu‘s with strawberries, or jam. The most common way is eating them with lingonberry preserves. The Swedish Pancake Pan is good for so many other dishes too. My dad used to cook us our own tiny fluffy omelettes, and they certainly look fancier than the large ones. You can make a yummy breakfast by making a few savory crêpes and then the fluffy mini egg omelette in the middle. The Swedish Pancake Pan is also great for other dishes where you want the perfect round shape. The Swedish Pancake Pans typically cost 15-30 dollars and are worth the buy, and especially kids love the mini-sized round treats! 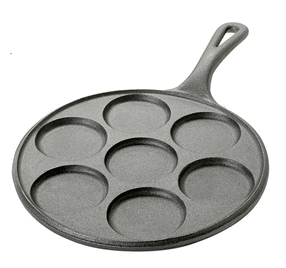 offers several different ones, starting from $15.99