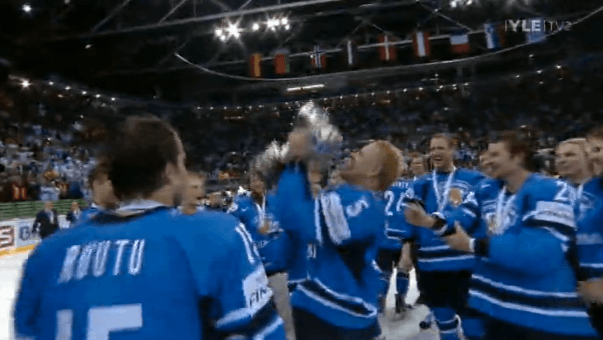 Congrats to Finland for winning the Ice Hockey World Championship 2011!

Ice Hockey to Finns is like football to Americans, but even SuperBowl in the US doesn’t equal to the level of excitement that Ice Hockey World Championships contributes in Finland. Over half of the nation was glued to their TV sets on Sunday evening local time when Finland was playing the Ice Hockey World Championship final game against Sweden. I was among the tens of thousands of Finns living outside the country and trying to catch the game live, via internet radio or broadcast. Luckily I was able to watch the game in my native language, and share the moment of Finland winning the Ice Hockey World Championships with my fellow Finns, and with my children. Finland won 6-1 and the sweetest part of the Ice Hockey World Championship gold medal was winning it over Sweden. There is no neighborly love between Finland and Sweden, mainly because Sweden ruled Finland for hundreds of years. While politically the two countries work well together, the historic battles are always in our minds when it comes to international sports. And there is nothing like war on ice between these two countries. Ice hockey is the national sports in both countries (and both countries have brought some of the best players to NHL as well), and there is nothing like beating your neighbor in their own game. Consider the Finland’s win at the 2011 Ice Hockey Championships equal to the US Team’s Miracle win in the 1980 Olympics, even though there was no last minute miracles. Just beating the heck out of Swedes and winning 6 to 1. While this might not have anything to do with my blog… I wanted to share this as a proud Finn. The best part of this day was watching the game with my three children, two of them Finns, and sharing the excitement of Finnish Ice Hockey with them. We are not really a big sports family; snowboarding and slalom are pretty much the only sports we all watch together, but watching ice hockey was such a big part of my childhood when growing up in Finland, that it was great to share this day with my children, and give them a small taste of my Finnish heritage. I also annoyed the heck out of my Facebook friends by posting my favorite ice hockey songs on my page. Just excuse me and ignore me this once, unfortunately Finland winning the gold medal doesn’t happen often. But I sure will stay glued to the screen next year too. PS. Conan, aren’t you happy you are in Team Finland? 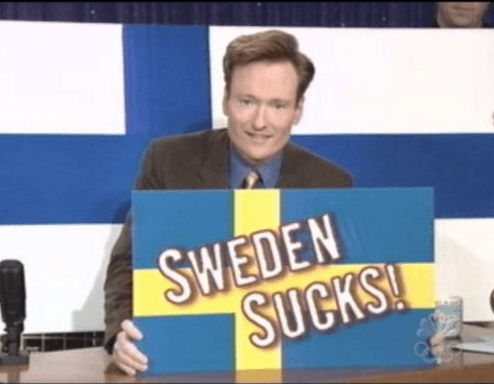