I keep telling this joke to some people that “I’m big in Finland” because it sounds like a line from a sitcom and seriously I like thinking that my life is a sitcom. And sometimes I need to crack my own jokes so I can keep laughing. I can’t always understand why other people don’t think my jokes are that funny. Oh well, everybody isn’t born with good humor, right? (Especially that Finn who is now ready to comment “I’ve never even heard of you” – just go away please). Anyways, I’ve loved working with Finland’s largest TV Network MTV3 and it’s been very exciting that now for example I get interview requests from Finnish women’s magazines. This fall has been exciting for me and I even was briefly seen on Today Show, have interviewed Nate Berkus, Bobby Flay and been to Las Vegas and all over. But the most exciting part was to launch a partnership with MTV3.fi in Finland, and I started to write two blogs also in Finnish, my native language. 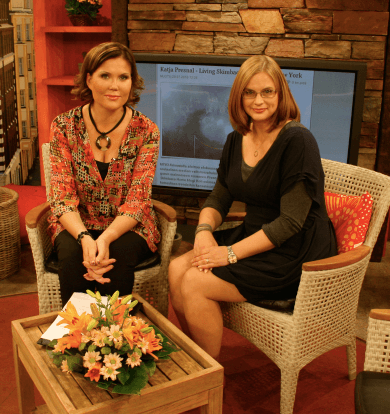 I had a media tour in Finland in August, and was on live Huomenta Suomi-morning TV show (it’s like Finland’s Today Show) and told about my life as a professional blogger. Kauppalehti, the major business magazine in Finland interviewed me the disclosure policies and several women’s and family magazines wanted to know how I balance family life and work life. Several newspapers did a story about me, two of them almost an entire page. I know – it must have been a slow news week. 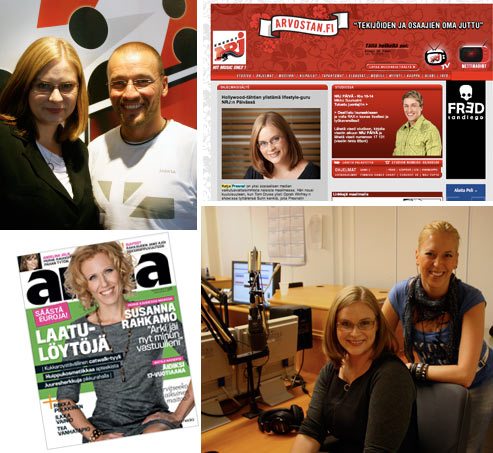 I had a publicist, her name is Christa and she looked like a super star herself, and I was interviewed at luxury hotel suites, kind of like those other people who really are Big Deals. It was like I almost was a Big Deal. But really, the entire time I didn’t feel any different or absolutely didn’t feel like a Big Deal, so honestly, I think the life of being a Big Deal might not be as fabulous as we normal people sometimes tend to think it is. I was on several radio shows and met TV network people, and passed hallways at studios several times with Antti Tuisku, whom I didn’t really recognize but got curious and figured he was really a Big Deal, because he was in all same places as I was (he is the 2004 Finnish Idols winner, and a Very Big Deal – kind of like we have biebermania, Finns have tuiskumania). It was all very exciting, odd and surreal, but I was surprised how much I felt like home in that world. I could be a Big Deal if someone asked me to. Maybe some of these TV networks should make a sitcom of my life – who wants to star in it with me? When my blogs launched in Finnish, MTV3 hosted a huge blogger contest for Finnish bloggers. The assignment was to blog what they thought was best in Finland – and the prize was to win a trip to New York City to meet me. See why I think I’m a big deal in Finland – they even hosted a contest to see me! I really think thousands of people participated because they wanted to meet me. The fact that it also included flights from Finland to New York, stay and exclusive events during the one week trip in NYC was probably a minor reason for many to participate too. I asked my Facebook friends and many of them would like to come to NYC to hang out with me too, so you never know, I might be that special that I was the main reason so many wanted to come. Don’t judge so fast… wait ’til you hear what all I did with my media friends from Finland in NYC this past week – and even you might want to win a trip to hang out with me! I might or might not be a big deal neither in Finland or New York City, but I know I can have fun in the city!