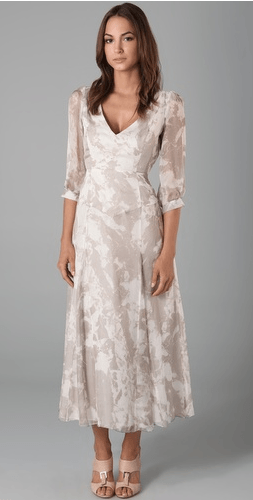 I really appreciate the fabulous name for this Rebecca Minkoff dress: “Katja Print Dress” (on sale for $127.50), makes me really feel special. I actually even like the print, especially I think it would make a nice duvet cover. However, the dress does not even closely look like me, and thus I don’t think it looks like “katja”. But this made me think if “katja” was a print how do I think it would look? And what does the name Katja mean anyways..? All I know that it was one of the most popular names in the 70’s in Finland and my parents thought it was very international since Katja was also popular in other European countries. I hated the name Katja growing up, because since it was the IT name, I usually had 2-3 other Katjas in the class with me and I wished my name had been more unique. I guess it took moving to the other side of the world to have an unique name! Anyways, here are some of the answers I gathered to figure out where the name Katja comes from… I’m sure you have wondered. Not. But I’m telling anyways.

What does the Name Katja Mean?

Name of Katja contributes sensitive, creative, and idealistic qualities to your nature that could be expressed in a variety of literary or artistic fields. You desire harmony and refinement in your environment and in all your personal associations. Although mentally quick and intuitive in recognizing the thoughts and feelings of others, you experience a lack of fluency in verbal expression in responding. Although the name Katja creates the urge to understand others, we stress that it limits self-expression and self-confidence causing moods. Name Katja, when combined with the last name, can frustrate happiness, contentment, and success, as well as cause health weaknesses in the fluid systems, heart, lungs and bronchial area.

I think some of that hits pretty close to home, but I also noticed they said almost the same words of some of the other names too so who knows how accurate that is. There are different spellings of the name (Katia, Katya) and different stories how the name Katja came about. The main belief is that the name came from Greece and traveled through Eastern-Europe to Russia where it became very popular. One explanation is that the source name was derived from the Greek term katharos (pure, innocent). However, it may have evolved from Hecate, the name of the Greek goddess of magic. Another possible source is katateinô, the Greek word for torture. Hm, innocent, magic or torture? My husband would say I can be all three. In Russia the name Katja is a diminutive of the name Ekaterina or Yekaterina which is the Russian/Eastern Russian version of the name Katherine/Catherine. All the meanings of the name Katja most likely are associated with St. Aikaterine (Katherine) of Alexandria, who was born a pagan but died as a Christian martyr. And there you have it. What does your name mean? katja, meaning of the name Katja