Watch Chris Mann on The Voice & Remember to VOTE 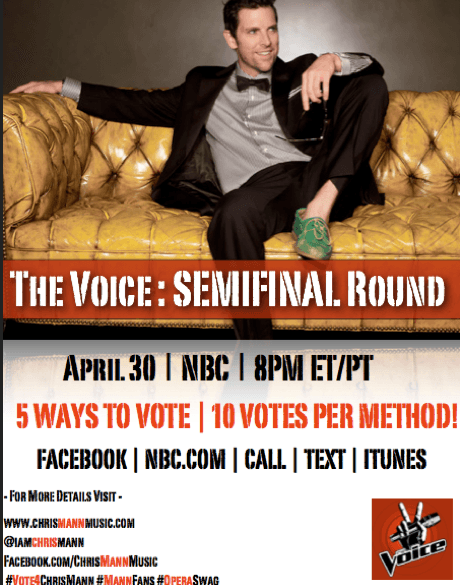 Watch The Voice tonight, Monday April 30th at 8pm est (7pm cst) and vote for Chris Mann. I am so excited to see Chris Mann on The Voice, and even if you haven’t watched the show this season – watch it tonight and help Chris Mann to make it to the finals. I will be supporting Chris all the way from Sweden, because he is not just a talented artist, but an amazing person. I’ve had the opportunity to meet Chris a few times, and he is so genuine, humble and I don’t wish him anything but success. Here is an old picture of Chris Mann and I. 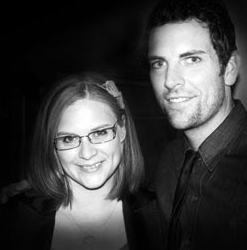 Here a previous performance from Chris, here he is singing the “Bridge Over Troubled Water.”

How to vote on The Voice

You can vote several ways after the show on Monday April 30th starting at 9:55pm est. You will have 12 hours to vote AFTER the show airs (WAIT until AFTER the show to vote). INSTRUCTIONS HOW TO VOTE: 1. Buy Chris’ NEW song performed on tonight’s show on iTunes itunes.com/chrismann You can “gift this song” to 10 friends for 10 votes! Click on the arrow next to the price and click “gift album.” NOTE: Only purchaces of TONIGHT’s song count as votes 2. Use your Facebook account(s) & vote TEN times on The Voice’s FB page http://www.facebook.com/NBCTheVoice “Like” The Voice’s Facebook page and vote! 3. Call by Phone TEN times from your landline & TEN times from any cell phone The voting number for Chris will be announced on-screen after his performance. 4. Vote through the NBC.com/TheVoice website nbc.com/the-voice/vote. You can vote multiple times here as well. 5. If you have Sprint you can vote via text messaging The number to text will appear on-screen after Chris’ performance Your text vote will NOT count unless made via a Sprint cell phone Using all methods you can VOTE 50 TIMES.

Connect with Chris Mann & other MannFans

Watch the twitter stream. You can connect with other Chris Mann fans by using the following hashtags: #MannFans #Vote4ChrisMann #ChrisMann #TheOperaGuy #TheVoice #TeamXtina and follow Chris on Twitter @IamChrisMann. Here is a message from Chris himself also explaining how to vote. Good luck Chris!! And one more video… I love this Kayne West’s Hearless cover by Chris. chris mann, music, The Voice, tv